Kieran Read all about staying at the top 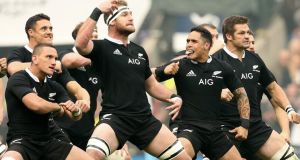 Kieran Read leads his New Zealand team-mates in the haka before their game against England. Photograph: James Crombie/Inpho

There’s an episode in the life and times of what is currently the world’s best rugby player which sums up the down-to-earth nature of this humble, hard-working and nice lad. By the age of 14 Read had already become such a stand-out talent that St Kentigern College, the famed, fee-paying, rugby school, offered him a scholarship, as they have done with Jerome Kaino, Joe Rokocoko, John Afoa and a host of others. Read went there for a year before giving it up and returning to Rose Hill College.

His explanation is what you’d expect. “It just wasn’t for me, growing up where I was and that,” he told this reporter yesterday with that modest, self-effacing grin. “I wanted to get back with my mates, and back to my local high school.”

If there is any danger of him not remaining grounded his dad is first in line, this week sending him an email that a player is only as good as his last game. “He won’t say too much but he’ll be straight to the point. Yea, he certainly keeps your feet on the ground.”

Read is the second of three boys to Terry, a surveyor, and Marilyn, a primary school teacher, and took up rugby at the age of four with his local club, Drury, in South Auckland, to emulate his older brother Gareth. A star pupil at Rosehill, in his final year he earned Head Boy status and was Sportsman of the Year, for he was also an accomplished batsman. But from school he “pretty much went straight down to Canterbury”, whereupon rugby took over. Nothing typifies the Crusaders’ famed recruiting more than the recruitment of the 18-year-old Read from the Auckland under-age set-up.

That was the making of him, he agrees. He played for the Canterbury NPC side before his 20th birthday in 2006, making his Crusaders Super Rugby debut the following year and becoming their starting blindside in 2008, followed by his All Blacks debut in November 2008 away to Scotland, a month after turning 23, and he has been their first-choice number eight since 2009.

Top of his game
Formal coronation of Read as the IRB World Player of the year awaits but even has to concede he’s at the top of his game right now. “I’m enjoying the year. I feel like I’m playing some of my best rugby certainly, but the way the team is adapting is, I guess able to showcase what I can do and the coaches have been great to let me go out there and do that. So yeah, I’ve enjoyed the season and I certainly feel like I’m playing at quite a high level at the moment.”

Read has long been a class act, and a rock around which the World Cup win was achieved, but he has progressed onto a new level this year. On foot of taking over the captaincy from Richie McCaw for the three Tests against France in June, it’s as if Read now realises himself how good he actually is.

An immovable and impassable wall in defence, his rangy running and range of skills have flourished with a new game plan which has placed more overt emphasis on tempo, width and keeping the ball in hand. So it is that he will often be stationed as the second last receiver, combining brilliantly with his wingers for a host of telling plays and tries.

For yonks New Zealand has placed Brian Lochore, Wayne Shelford and Zinzan Brooke in an exclusive pantheon of great All Blacks’ number eights. Now, as a world-class World Cup winner, Read sits at that table.

Having scored nine tries in his first 48 Tests with the All Blacks, this year he has scored six tries in 12 Tests. They’re no ordinary tries either, but wonderful finishes such as his high one-handed take at full charge from Charles Pitau’s offload in Paris.

Underarm flick
There have been wonderful try assists too, three in his last seven games, such as the one-handed underarm flick as three English players were driving him over the touchline for Julien Savea’s opening try last week.

Reigning world champions, the prospect of a 14th win in 14 Tests this year, you ask him what it is that sets the All Blacks apart. “It’s a tough question mate, I think. The All Blacks is bigger than just a game in New Zealand and certainly when you come in, there’s rich tradition and a culture. So there’s a lot to live up to. There’s pressure there and expectations which is what you want and so it’s just living up to those, and so I think it’s ingrained in us to go out there and play well, and not only to win. It’s just the way, I guess, we’re brought through as players and probably as a nation.”

To become the first All Blacks side to go through a calendar year unbeaten is huge, but all the more so after falling short in their 14th and last game a year ago against England. The defeat tarnished a wonderful year,and his off-season.

“Yeah, I guess it was a bit tougher over the summer certainly. As soon as you get home that’s what people are talking about. But yeah I think you can’t really worry too much about what happened then. This is a new challenge for us. We’ve got to work hard and I think we learned a lot from what happened last year so we’ll make sure we don’t make the same mistakes again.”

Furthermore, no All Blacks side has ever lost to Ireland. So is that something that needs to be said, or is just understood? “Yeah, it’s understood, and I guess it’s one of those expectations. There’s only a few sides that haven’t tasted victory against us and you don’t really want to be a part of that team that lets them. So yeah, it’s at the back of the mind.”