At age 35, Ireland outhalf sees no reason to retire if he can still perform at required level 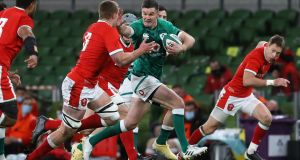 These are uncertain times indeed, and while there are countless bigger issues in the world, this is certainly true for the 90 or so players whose contracts expire next June, particularly those on the other side of 30 who have young families.

Their futures beyond next June would normally have been resolved by now, but the IRFU has suspended all negotiations until next year. Johnny Sexton falls into this category, but at 35 he has re-iterated his intention to continue playing.

Tweaking his hamstring in the opening Autumn Nations Cup fixture was especially frustrating after a sharp first 28 minutes against Wales but pending his return against Scotland on Saturday he maintained: “I feel good. I feel good when I’m out there on the pitch and now it’s just about getting out there and performing to prove that there’s more in me. I feel there is, I feel I can get to another level and the day that’s not there is the day I’ll walk away.

“There’s been guys in teams over the years that have gone to World Cups at 37/38. Brad Thorn, a guy I played with who is my inspiration at the moment,” said Sexton with a smile, “Richie McCaw winning a World Cup at the age he did, Dan Carter having an incredible World Cup after being written off and struggling with injuries for numerous years. Do I think I can get there? I think I can. But at the age you’re at, you’ve got to take it one year at a time.

“It’s not like it’s totally alien or no one has done it before, especially being an outhalf. I’m not a player who has relied massively on pace over the years, so we’ll see what happens.”

Anyone writing him off only fuels his desire.

“Yeah, massively. All I want to do is be the best I can be, first of all, and if that means I’m the best outhalf for any given game or whatever, then why shouldn’t you play? That’s the attitude I’ve got.

“I want to be the best outhalf in Ireland and I still have aspirations for other things as well. Why not?

“I’m not going to just retire because you guys want me to. I’ll keep going if I feel good and I feel hungry. I know some past players want to retire me as well but I’ll crack on,” he said with a wry smile.

Amid all this uncertainty, Sexton admitted there might be a risk of some players trying too hard. Whatever about that, a largely stultifying Autumn Nations Cup has been no great advert for the game. With the breakdown law modifications favouring the defending team, there has been a surfeit of kicks out of hand, witness 74 of them in the Newcastle-Sale game last weekend.

“No, it’s correct but it’s the trend, it’s just the way the game is going at the moment. You look at the teams that were in the World Cup final – South Africa and England kicked the ball the most. Eddie Jones obviously had a good cut off of us for kicking the ball a lot under Joe even though at the time we actually weren’t kicking the ball that much. It was just that our kicking game was very good,” noted Sexton in reference to Jones’s quip before the 2017 meeting in Dublin.

“It will be raining high balls – it will be kick and clap and the fans at the Aviva Stadium love it,” said Jones.

“Maybe it’s the team that kicks the best that wins,” added Sexton, which is also a recent assertion by Jones, “but I suppose it’s such a lottery at the breakdown it’s kind of the risk/reward about playing in your own half”.

Describing possession in one’s half as a liability, he admitted: “Yeah, it is worrying. It’s worrying to watch. I suppose we’re trying to get the balance in our game where we are playing with the ball in hand when that is the right thing to do, and we’re trying to put pressure on the opposition when it’s not.

“When we’ve done that well we’ve been dominant and when we’ve got caught chasing the game a little bit and playing too much, teams are just picking off penalties. Whether they’re legal or not at the breakdown is another question. A couple of the penalties against England, the body position of the poachers was just like, you can’t just understand how it’s not a penalty for us?” said Sexton, clearly in relation to two turnover penalties awarded to Maro Itoje and Ben Earl.

“That’s the frustrating part. It’s just a risk/reward, that’s what I’m trying to say, and at the moment it’s leading towards teams kicking the ball more.”

SSE Airtricity extends title sponsorship of the League of Ireland 12:49
Quarantine for Australian Open players fully funded by Tennis Australia 12:39
Keeping the world off-balance is what Kyrie Irving does best 12:02
Eddie Jones forced to self-isolate after his assistant tests positive 11:44
Rory McIlroy confident Tiger Woods 'will be just fine' 11:38
Crossword Get access to over 6,000 interactive crosswords