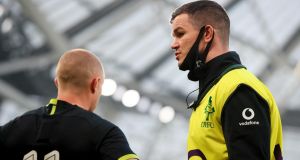 Johnny Sexton knows he isn’t having it both ways this week. He’s probably feeling it from the tone of the questions following one of those oddly disappointing wins over Georgia where the scoreline is not so handsome looking and the execution of it less so. The Irish captain gamely tells all to think whatever they like about Ireland performances and he’ll think what he likes too.

There are often parallel conversations with players that sometimes don’t meet and as articulate as the Irish captain is today, he is content to let it slide. Today is one conversation he’s happy will run along with him believing one narrative and those listening to him probably another.

It’s not unusual and Sexton does have the advantage of experience and team knowledge. But if the years have taught him anything and the certainty is that he fully understands, the only true reckoning is the one on the gala opening night. The full 80 minutes.

“We are just saying what we feel . I know you guys don’t agree but we feel like we are progressing and we need to show it,” says Sexton. “That’s where the gap in opinion is. We are doing some great things in training, some bits in the games.

“You talk about playing well against Wales at home but again bits and pieces, we need to put out the 80 minutes performance with the finishing touches. We feel we are creating lots of opportunities but we’re not finishing them. That’s the big learning for us.

“When you have opportunities at Test level you have got to take them and when they are as clear cut as the one’s we’re creating we need to take them. That’s what we feel. You can disagree if you want. But that’s how we feel.”

Now the urgency is not only for his normal resumption to playmaker at outhalf against Scotland this weekend, after a few weeks as water carrier and angry man on the touchline (his own characterisation). But also for the team to clarify that they are not stuck in some flailing limbo between Joe Schmidt’s beloved micro detail and Andy Farrell’s more heads up, play what you see.

The important issue, he explains, is one doesn’t exclude the other, although some of the detail seemed to go missing, especially in the Georgian second-half.

The growing pains from Joe to Andy seemed ever more visible as the match continued. But Sexton believes the team are not spiralling backwards.

“No,” he says. “If you look at our results we’ve lost twice to England away and we’ve lost to France away. We won the rest of our games. So if you are talking about results which is what Test match rugby is about we can win on Saturday.

“There’s been plenty of Irish teams over the years that have lost in Twickenham and lost in France. Were they games we could have won? Maybe not the first England game. But the second one and the third one. The French one, we feel there are things that we did that got away from us.

“England were in a World Cup final and are probably one of the better teams in the world at the moment and we have to get up to that level so are we going backwards? Not when you compare it to 2019. If you go and compare it to 2018 obviously. We went backwards in 2019.”

The point about England is a fair one, although, the World Cup finalists were also heavily caned for their defensively driven winning tactics. The question might be how Ireland wish to be measured. The answer to that has always been against the best. And so it is.

Sexton’s is not entirely a straight bat captain’s defence of the coach and the team. He recognises the parts that did not work. He concedes there are gaps to be closed, creases to be ironed out and some fine tuning in areas that have been stuttering. But his sense of it is that it’s in Irish hands to solve those problems. There’s an aspect of we believe in ourselves, even if the evidence has not yet fully stacked up on the pitch.

“Georgia, I thought we started the game brilliantly,” he says. “First 40 I thought we looked very good, if you talk about the amount of time we had in the opposition 22 and just haven’t capitalised. That’s us not executing. Sometimes we are seeing it and we’re not executing, sometimes we’re not seeing it and we’re just running ourselves into brick walls.

Correction. The narrative of the players and those looking in from the outside do sometimes meet.