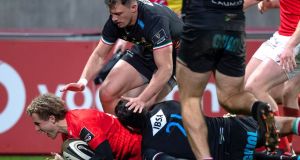 Munster took their season to seven wins from seven outings against a threadbare Italian side that had just one win from seven matches before the night began. Munster now sit comfortably at the top of the table in Conference B with the beleaguered Zebre bottom of Conference A on just five points.

Still unbeaten at home in all competitions in 2020, eight tries from Munster began after just eight minutes, with centre Dan Goggin running onto a chip over from JJ Hanrahan. On a greasy evening, Munster then got in their own way a little before World Cup winner Damian de Allende added the second - running a hard line after a series of Munster scrums.

A penalty try was the third try for Munster on 36 minutes before Darren Sweetnam finished off the most polished move of the first half from a lineout in their own half with Goggin front and centre, the bonus point win was secured just seconds before the break. Munster led 28-3.

Committed but out classed Zebre struggled to contain a far from error free Munster with Hanrahan’s quick hands quickly making it five tries just after halftime. Munster know they left at least three tries on the field but not before a score on his senior debut from Sean French steaming down the left wing after 57 minutes.

Munster pushed hard for more scores and emptied the bench. But they finished playing a loose game, the match already won from before halftime. Still, Craig Casey and a first from Thomas Aherne squeaked in for two more at the tail end.