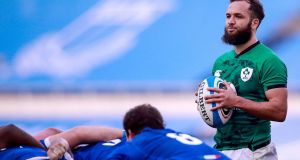 Lancaster explained: “It must give him great confidence to know that he has been selected as first-choice. I know Conor has been injured but I think he (Gibson-Park) has grown into the role. He’s always had the x-factor, if you like, but I think his control of the game and his basics have been very good.

“The speed and the width of his pass, his box-kicking has been good; he brings something slightly different from some of the other scrumhalves. It’s great to see him come over here as a quiet young man and grow into an international player.”

Leinster’s senior coach agreed that Gibson-Park should be seen less as an impact player, a role he might have settled for initially. “To be honest, he probably came from New Zealand with that mindset. He was always the number two, came on in the last 10 and never really got a start.

“There were big games where he has started for Leinster in the last two or three years, probably the Scarlets game stands out in my mind in the Champions Cup, he was excellent really. That level of consistency he has been searching for. But I think it’s a lot to do with his mindset now.

“I think he believes he is the number one, thinks he should be starting. As a consequence, he plays like that. So, he plays with a lot more control and composure. He’s very down to earth, Jamo, he’s very humble and hard-working. To be an international player, you have to believe in yourself first and foremost.”

Is there an element that Gibson-Park might be underappreciated for those less familiar with his ability? Lancaster said: “I think he’s just finding his feet. As an international player, obviously it’s a very steep rise in terms of experience, scrutiny, pressure and the sideshow that surrounds the game. But also what changes as well is the scrutiny on you and your position.

“That’s the next challenge for him, to keep pushing on and showing what his X-factor is but once he backs himself and believes in his own ability, which everyone else does, then he’s an outstanding player.”

Meanwhile, Leinster will have Harry Byrne available for the Pro14 game against Zebre in Parma on Friday night. The young outhalf has passed the return to play protocols after being forced off with a head knock in the victory over the Glasgow Warriors and missing the win over Ulster. A decision on the availability of Ciaran Frawley (shoulder) and Sean Cronin (back) will be taken later in the week.

Lancaster also confirmed that Caelan Doris is nearing a return following concussion issues with the province taking a measured and a slower approach than normal. “He’s definitely making positive progress. He was on the field again today (Monday) and we are hopeful that we can progress and get him back playing again sooner rather than later. It’s definitely a positive and we are moving in the right direction.”