Rugby World Cup TV View: This one is on Jamie Heaslip 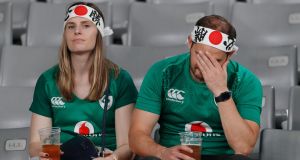 What was that line from Clockwise again? “It’s not the despair, Laura. I can take the despair. It’s the hope I can’t stand.” So, if we are to learn anything from this World Cup it should be to never again use words like #Believe in rugby-related marketing campaigns. For France 2023, it should be something along the lines of #Believe (We Can, With A Bit Of Luck, Get Out Of The Pool, But Anything Beyond That Would Be A Complete Bonus). It mightn’t be as snappy, but having more humble hashtag expectations will ensure that our hearts don’t take a “tonking”, as Eddie O’Sullivan described what Ireland suffered at the hands of that shower from south of the equator.

At times like this, it’s only natural that the recriminations become quite bitter, we all need someone to blame, and while it might be harsh to point the finger at him, seeing as he wasn’t actually on the field, this one is on Jamie Heaslip. Not the defeat in itself, but the raising of our hopes to such levels that we were already ordering the Nachos and cheesy dips for the semi-final against England.

Wearing a jacket more commonly associated with folk who say “tally-ho!” to their dogs, instead of ‘walkies!’, Jamie was pitchside with Hugh Cahill and Donal Lenihan, telling us that he’d asked the players if they wanted him to bring anything over from Ireland, him assuming that they’d be there for another fortnight. But despite possibly being left destitute from the excess baggage fees for all the Tayto, Barry’s Tea and rashers that he’d had to pack, he still had the look of an excessively cheerful man, as good as telling us we had nothing to fear.

“I was looking at both 15s and I wouldn’t swap anyone – I actually think New Zealand might take one or two of our players if they had the choice,” he beamed, although he stopped short of suggesting that we’d tonk them, forecasting that “Ireland are going to edge it by a score”.

That level of confidence proved infectious, with no known vaccination.

Donal: “I just have this sneaking feeling we’re going to do it!”

Stephen Ferris: “Every boxer has a chance, and we certainly have a chance today!”

Brent Pope: “I’ve got a gut feeling that Ireland are going to do it!”

Even Eddie was almost at it. “If we’re in the game with 10 minutes to go, I’ve a feeling we’ll nick it.”

New signing Michael Lynagh peered over his spectacles at his colleagues in a puzzled sort of way, but was polite enough not to ask them when they last saw their marbles. Daire O’Brien then threw him the stat of the day – “Johnny Sexton has played 147 minutes out of 320, Ireland are 78-8 up with him on the field and 43-19 down without him” – to which Michael replied: “You better keep him on the field, eh?”

Anyway, the first half. And that’s really all you can say.

Before the game, Daire had asked “how many points do you need to beat the All Blacks?” “One,” Stephen had chuckled. We’d have been chuffed with that tally at the break. “Ireland haven’t had a sniff,” as Donal put it, 22-0 the score.

But there was no end to the flow.

Come full-time, Daire asked Michael to discuss “Ireland’s shortcomings”, but Home and Away was scheduled for 50 minutes later so he only had time to go through half of them. Eddie, meanwhile, was having none of that chat about New Zealand just being too good for us on the day, “that’s the easy way to go”, he said, opting instead to give Ireland another tonking.

“They dismantled us physically and tactically, they ran over us for a shortcut, they went through us and around us – we were drowning from the start. We kept looking for a silver lining in the cloud as the game went on, but it just got darker and darker, we just got beaten up in every facet of the game …. torn to shreds.”

Apart from that, he thought the boys did themselves proud.

When it’s a relief to switch over for the latest from Westminster, after New Zealand had smoothly and comfortably sealed Ireland’s withdrawal from the World Cup, you know it’s been a tough day. Boris might be asking them for some strategy tips.