Keith Duggan at the Tokyo Stadium 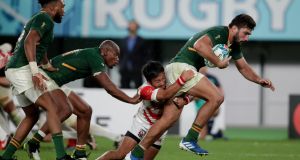 Tokyo may run rich in fantasy but South African rugby has always been about hard realities. In the end, the quarter-final weekend finished on a predictable sight: Springboks power squeezing out the life and soul and fun that Japan had brought to this tournament. South Africa ended the national party with a 26-3 win that suggests they are moving like a freight train towards the final.

All week, they assured everyone of how much they loved Japan. Then, they beat them down. The problem for Jamie Joseph’s team was that even as they danced through one thicket of dark green defensive cover, they just ran into scary monster after scary monster – a Duane Vermeulen or Lood de Jager or Eben Etzebeth or Tendai Mtawarira, crouched and ready to drive both Brave Blossom and ball back 10 yards – and 10 years, if possible. The physical ordeal of trying to think and play a way through South Africa’s suffocating defensive game and their brutally efficient scrum power began to tell as Handré Pollard slotted over a series of second half penalties that moved the dream of a semi-final out of Japan’s reach. Meantime, the replacements just got bigger: Steven Kitshoff and Rudolph Gerhardus Snyman, the 6’7”, 18 stone lock out of Potchefstroom.

For about half an hour, perhaps, the South Africans must have been starting to feel a little of the disorientation that undid the Irish and Scots. Strange things happen when you play Japan. For all of their possession in the first half, they blew two spectacular chances, with Lukhanyo Am chucking an offload at the feet of Makazole Mapimpi with the try line at their mercy. A few minutes later, Willie Le Roux spilled a pass and, briefly, the Springboks were in danger of making Ireland’s handling look good. And when referee Wayne Barnes waved off Damian De Allende’s try, it meant that South Africa were not where they had hoped to be at half time. Beforehand, Rassie Erasmus had kicked a jaunty drop-kick as he strolled around the pitch. Now, he hurried the steps to the dressing room. Becoming the latest victim’s of Japan’s surge through the rankings was not in the grand plan.

But the Boks weren’t about to succumb to romance or offer their hosts even the faintest opportunity – the glimmers of daylight – to transform the evening into the kind of highwire act of skill and risk-taking and invention that had brought them so far. Instead, South Africa gave the home crowd an exhibition in their blunt force power and hard, sticky incessant tackling and, in the 66th minute, a powerful maul from which Kitshoff peeled away and played the livewire scrum-half Faf de Klerk through for a try under the posts. The conversion made it 21-3 and by now many of the Japanese fans looked disheartened and had fallen silent.

There was nothing to cheer about and watching South Africa’s rapacious work ethic and greed at the breakdown is not how they like to get their kicks in life. The pound-for-pound courage and sharpness of Yutaka Nagare, Japan’s terrific and, in the company of the South Africans, absurdly small number nine, only highlighted the prosaic truth that size will always matter in rugby. At one stage, Nagare fronted up against Siya Kolisi and Pieter-Steph du Toit, who had been shoving Pieter Labuschagne, the Afrikaner now living and playing in Japan. The gargantuan Springbok flankers looked down at him, blinked and walked away.

In an alternative world – and one that had been well mapped out, Ireland would have been here on Sunday evening against South Africa. And it wasn’t hard to imagine the Springboks pounding them into submission. Even after the contest had slipped away, the Japanese crowd desperately wanted their adventure to end with the sight of their boys slinging the ball with abandon and producing one of their lightning tries. It wasn’t to be. Just a measly penalty was all they coughed up to the team that returned some of the old spirit of adventure to the game. Then came the big South African boot and all was snuffed out.