Owen Doyle: Jaco Peyper’s cardinal error puts it up to the referee selectors 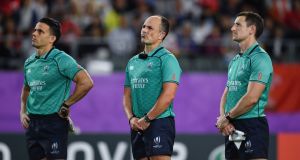 What was Jaco Peyper (centre) thinking at that moment? The answer is, unfortunately, probably “nothing”. Photograph: Ashley Western/PA Wire

Inevitably, and disappointingly, I must start with the Jaco Peyper photograph. After Wales’s 20-19 win over France in the quarter-finals, he joined with a group of Welsh supporters, and is photographed – smiling broadly – apparently mimicking Sebastian Vahaamahina’s elbow to the face of Aaron Wainwright. Peyper sent the French lock off, correctly.

Peyper has apologised and has not been considered for the semi-finals. Vahaamahina has announced his retirement from international rugby.

Those are the cold facts.

What was Peyper thinking at that moment? The answer is, unfortunately, probably “nothing”. His behaviour may well have been influenced by not-yet-dissipated adrenaline still flowing. Or, he simply got caught up in the moment and got carried away.

He definitely made the cardinal error of forgetting that smart phones have a dangerous capability. Within minutes that photo was pinging it’s way around social media and beyond. It is everywhere.

The referee’s Team 21 has been let down as a consequence, and the selectors’ options have been cut down.

A certain set of semi-final results, and one poor performance, would leave them in a huge bind. And it is very hard to see Peyper reappearing: that photo isn’t going anywhere. I can imagine it caused a lot more annoyance within World Rugby than is evident. They have done well to “low-key” this incident.

The whole thing got me thinking about the really viable options for the selectors in this World Cup, and were they all that great in the first place?

Think for a moment of referees as colours – we have very different opinions as to our favourites. The guy who buys a Mercedes Coupe in black with smoked windows can’t for the life of him understand how someone could buy the same car in pink with white leather seats. And vice versa.

So, knowing opinions will differ, here’s my take on things.

When the game was on the cusp of professionalism, the 1995 World Cup was held in South Africa. Available to the selectors then were David Bishop, Colin Hawke, Wayne Ericsson, Ed Morrison, Jim Fleming, Dave McHugh, Patrick Robin, and Stephen Hilditch.

That’s seven top, top-class referees competing hard for the knockout stages. Morrison refereed that year’s final, and Hilditch a semi-final. Bevan also reffed a final plus a quarter and two semi-finals, making him a hugely successful referee in the history of World Cup.

Fleming, semi-finalist also, became the last Scottish referee to feature at a World Cup way back in 1999 (20 years, that’s far too long for Scottish Rugby not to have stepped up to the mark).

I don’t believe that this year’s group offered the selectors the same luxury of choice. Since 1995 the game has changed enormously, and all referees at this level have no option but to be full-time. Some, of course, do dip in and out of other work. But, in essence, they are available all year round for top-class rugby.

In 1995 most of the referees had their own jobs – Stephen Hilditch was a headmaster, for example. Possible today? Not a chance, unfortunately.

I say unfortunately because I believe it is extremely hard to be so totally immersed in refereeing, making outside interests difficult. A role outside refereeing makes it easier to wind down and, having analysed the performance (good or bad), move on more quickly to other issues. But, I repeat, not possible today.

Nevertheless, I am certain that World Rugby, in conjunction with unions, will be looking at ways of widening the pool of referees who can compete for the knockout stages.

I think one move to attract more people to the role would be to insist on, and provide, education for their career of choice post-refereeing. Futures need better planning. In other words, proper incentives and better remuneration.

Going back a little further, Irish referees have always made a great contribution. Dave Burnett was at the inaugural World Cup in 1987 and was tipped for the final. He was rightly considered the best at that time, accuracy allied to instinctive game knowledge and sense for advantage.

France beating Australia in the semi seemed to alter the thinking, and Oz Kerry Fitzgerald – a very good referee – was appointed. We had to wait until 2007 to get a final, with Alain Rolland.

John West had finished a top-class career prior to the first tournament. My abiding memory of him has nothing to do with actual refereeing. We were returning, the worse for wear, from a Wales v Australia match which I had reffed the day before.

The turbo-prop plane dipped, dived and see-sawed as we were blown ferociously from Cardiff to Dublin, engines groaning. Burnett and Doyle were white knuckled, petrified. Meanwhile, JW was in the back of the so-called plane correcting maths papers. Life can be unfair.

That Grand Slam team was a golden age of Australian rugby – Farr-Jones at “9”, Mark Ella at “10”, plus David Campese and captained by the very affable Andrew Slack who had spent a season or two with the Wanderers club in Dublin.

Alan Jones, now a TV host, was their excellent, if unusual, coach. He knocked on my door before dinner on the Friday night, armed with clip board and coloured pens. “G’devening Owen, you remember that chat we promised ourselves?”

I didn’t because we hadn’t.

Nevertheless, that enjoyable chat was a precursor of what has become the detailed and well organised norm.

Right now, there will be keen exchanges between coaches and the referee’s manager, Alain Rolland. Queries will all based on detailed video clips. Coaches will be anxious to reconfirm, and to be fully aware of, the parameters which the referee will work to in the key areas.

The referees will, in turn, be reviewing the teams, building really good consistent game plans. Failure to prepare would be preparing to fail, stones will not be left unturned.

Once again, an important word of good wishes to the semi-final match officials, particularly to the men in the middle – Nigel Owens (New Zealand v England) and Jerome Garces (South Africa v Wales).

And while there are lies, damn lies and statistics, an interesting note to finish on is that New Zealand have now won 19 out of last 20 tests with Owens, but they rarely lose. And South Africa have won only one of last 10 with Garces, but they’ve improved hugely.

Make of it what you will.