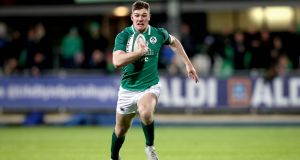 Ireland coach Noel McNamara has made four changes to the side that lost to South Africa for the third and final pool assignment in what has been a physically gruelling Under-20 World Championship.

Lansdowne wing Peter Sullivan, who was summoned to France following an injury to Daniel Hurley in the defeat to France, gets his start in the tournament, as do Aaron Hall and Garryowen flanker Jack Daly.

Matthew Dalton is restored to the secondrow alongside Jack Dunne. Sligo’s Jakub Wojtkowicz, who replaced the injured James French, is named in a match-day squad for the first time.

Georgia represents another physically demanding challenge – they lost 33-27 to South Africa and 24-12 to France – and from an Irish perspective it is important that they win this match as it would allow them to compete for fifth to eighth place in the tournament in their final two matches. However, a third loss and they would be competing in the ninth to 12th bracket, with the side that finishes last relegated to the World Under-20 Trophy tournament for next season.

Ireland led 17-5 at half-time against France before succumbing 26-24, while after a disastrous start against South Africa they clawed their way back to lead 17-12 only to eventually lose 30-17.

In both matches they played some excellent rugby but have yet to produce an 80-minute performance, and there are obvious areas of improvement required. They conceded half a dozen scrum penalties the last day and it’s an area that will be under scrutiny again against the powerful Georgians.

McNamara said: “We have two tough games under our belt and are disappointed with the results so far. We have another tough game ahead of us against Georgia. We are all looking forward to the game, and, hopefully, we can perform to our potential.”