England can ‘rewrite history’ against All Blacks – Eddie Jones 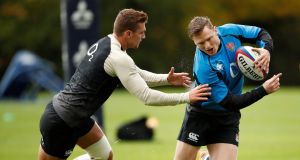 On the list of rare black-and-white occurrences, England beat the All Blacks only slightly more often than giant pandas give birth in British zoos. Eddie Jones is determined to address this below-par strike rate (the rugby, not the pandas) and is urging his reshuffled squad to “rewrite history” when they meet New Zealand on Saturday.

It will not be easy, because it never is. The All Blacks have played 24 Tests in England since 1924 and lost on five occasions. They have also won 14 of the past 15 meetings between the countries since 2003. As Jones bluntly put it: “Only 33 per cent of our players have beaten New Zealand. We want to come off the field with 100 per cent of them having beaten New Zealand.”

There was plenty more in a similar vein, almost certainly designed as much for Kiwi ears as English ones. “Every chance you get to play against New Zealand is something in your rugby life you never want to regret,” Jones said. “For our players there’s a chance to change English rugby history. That’s the opportunity for us.”

As calculated rallying cries go, it is a sensible choice. There is no use pretending England are going in as favourites against the world’s No 1 team. Equally, the home side like to feel they have a puncher’s chance at Twickenham, where New Zealand’s last three red rose collisions have yielded a 38-21 defeat in 2012 and two modest wins by three and eight points. This Test, as ever, will be about imposing their will before the All Blacks impose theirs. “We are not copying anyone else, we are trying to play English rugby,” Jones said. “We feel that is the way we can be the best team in the world.”

Hence the tweaks to the XV who squeezed past South Africa, with Chris Ashton, Ben Moon and Sam Underhill coming into the starting line-up for Jack Nowell, Alec Hepburn and the injured Tom Curry. England accept the need to score tries to beat New Zealand, which explains the promotion of Ashton – who “can sniff a try from anywhere” to quote the England coach.

If they can click into gear quicker than they did against the Springboks and exert early scrum pressure, it could just turn into the type of taut, smash-and-grab contest England would prefer. Cue the reliable Moon from the outset instead of the ball-playing Hepburn. “Ben’s a good, solid citizen,” Jones said. “He’s one of those blokes who goes down the coalmine for you every day.”

The selection of Underhill is also indicative of the guerilla tactics the home side will fancy employing, the Bath openside’s defensive excellence having earned him the nod, with Curry unluckily invalided out of the rest of the autumn Tests. It means no room for the 21-year-old Zach Mercer, so promising off the bench against South Africa, with the hard-nosed Courtney Lawes selected among the replacements. New Zealand may still lift the Sir Edmund Hillary Shield but, if so, Jones wants to make sure they do it the hard way.

He is also adamant that, regardless of what anyone says, his bench men are set to play as crucial a role as his starters. “Finishers” may rank up among the most toe-curling new entries in rugby’s lexicon, but New Zealand win such a high proportion of Tests in the final quarter it is hard to disagree when Jones suggests those on the field at the end of a game are as valuable as those who kick it off. “If I had my way I’d have all the players numbered the same,” stressed the head coach. “History tells you New Zealand win most of their games in the last 20 minutes of a Test match. So which one is more important this week, the starter or the finisher?”

The ever-rising intensity of the game is another factor, with zero allowance permissible for puffing forwards in the later stages. “The acceleration requirement of the players is 30 per cent more now than it was two or three years ago,” Jones said.

“I know there’s one famous coach who says they should all play 80 minutes, but the reality is how many front-rowers do you see play 80 minutes? A front-row now is expected to carry the ball 15 times, make 20 tackles, clean out 20 times and sprint like a back-rower. The requirements of the game are so heavy now you need that 80 minutes for every position.”

What will never go out of fashion is pace. England would have loved Manu Tuilagi to be fit – the big man is still fractionally short of a gallop – but they do have Ashton, back for his first England start for four years. If he manages to add to his 19 tries in 40 Tests, in addition to performing his defensive chores, it will make up for a lot of lost time.

“How many times couldn’t we pick him because he’s been suspended,” asked Jones, rhetorically. “He’s always up to no good. Wherever there’s trouble, there’s Ashton. You just give guys like that a free rein, make sure they’ve got a smile on their face and away they go.”

Saturday’s Test, for both Ashton and England, is a perfect chance to change perceptions for ever.