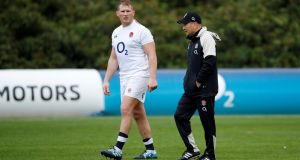 Plans are still afoot to make a feature film of Eddie Jones’s finest tactical masterclasses. Even today’s Twickenham blockbuster cannot hope to match Japan’s 2015 Rugby World Cup win over South Africa, the Brighton-based thriller starring England’s current coach. Not since Jaws, the posters will proclaim, has there been a movie based on a more shocking seaside outcome.

Maybe that is why Jones went for a cinematic metaphor before New Zealand’s long-anticipated visit to English rugby’s colosseum. History, he believes, is full of teams so dazzled by the All Blacks’ aura they might as well have sat in the stalls. “They eat popcorn, have a can of Pepsi and they watch the movie. By the time they realise ‘we can be in this’, it’s too late. We don’t want to sit there and watch, because that’s what happens when you play New Zealand sometimes. We want to make the movie, we want to be film directors.”

Lights, camera, action. This England side are hardly Hollywood royalty but their heads will not be turned, Jones insists, by the stars of the silver fern. Following a minute’s silence to remember both nations’ fallen, the home players will be expected to concentrate solely on their duties once the pageantry has been completed and the strains of the Last Post have drifted away on a potentially damp breeze.

In those final seconds between the haka and kick-off, the sense of anticipation will also be unusually powerful. The first World War lasted 1,564 days; it has taken almost as long for England and New Zealand to be reunited since their last meeting in November 2014.

That game ended in a 24-21 defeat, the All Blacks’ 14th victory in the last 15 editions of this fixture. England know the odds are against them but are far from resigned to a similar outcome this time.

Because if Jones’s team were slightly fortunate not to be 20 points adrift of South Africa by half-time last week, their subsequent fightback was a glimpse of what might yet be. Missing a few key men they may be, but resolve is not a problem. Jones has been canvassing the opinions of the England players who featured in the British and Irish Lions’ drawn series in New Zealand last year, and is adamant that no one beats the All Blacks by tiptoeing into the fray.

“We need to understand that like any team they’ve got weaknesses and we’ve got an opportunity to get at them,” murmured the head coach. “Thirty-three per cent of our players have beaten them and the other 67 per cent want to beat them. We’re happy to go out there and get stuck into them. If we’re good enough, we beat them. If we’re not good enough then we’ll work out how we can get good enough.”

The longer-term goal of success at next year’s World Cup, in other words, will ultimately outweigh today’s outcome from Jones’s perspective. Perhaps, but Steve Hansen has not picked his strongest-available All Blacks side on a whim. Puncture English self-belief now and it will be that much harder for Jones to pump the chariot’s tyres back up between now and Japan 2019.

England’s most glaring problem is that any backline containing Beauden Barrett, Ben Smith, Damian McKenzie, Rieko Ioane and Sonny Bill Williams is liable to score more than 25 points, even if they play badly. When they lost to South Africa in Wellington during September they still managed 34 points; they have registered at least four tries, remarkably, in each of their past 12 Tests.

England, by contrast, did not cross the whitewash once against South Africa, relying entirely on the boots of Owen Farrell and Elliot Daly. When Jones refers to New Zealand as the benchmark of his own squad’s progress, he is talking about all areas. Restrict Barrett and co to bit-part roles and it will represent a serious triumph for the forwards coach, Steve Borthwick, and the former All Blacks head coach John Mitchell, now presiding over England’s defence. Tear the visitors’ defensive line apart repeatedly, as Manu Tuilagi and his team-mates did back in 2012, and the whole world will sit up and take note.

A decent indicator will be George Kruis; if the Saracens lock plays well so, generally, do England. New Zealand, even so, are still more than capable of finding another gear via Brodie Retallick, Kieran Read, Aaron Smith and their shrewd kicking game. “They apply the pressure and feed off the scraps,” says Scott Wisemantel, England’s attack coach. “They’re outstanding at it.”

Penalties will not be enough: it is now 100 Tests and seven years since the All Blacks lost to a team who did not score at least one try. Only if Chris Ashton runs amok, Farrell kicks everything and Brad Shields – captain of the Hurricanes until last summer – proves the All Blacks selectors spectacularly wrong, will England achieve their heart’s desire.

What a vindication that would be for Jones, almost enough to justify a movie sequel on its own. With Will Carling and Jonny Wilkinson both now assisting the squad, even the supporting cast is increasingly box office. Either way, Jones is adamant the mystique of the haka will be irrelevant in terms of determining the outcome. “I can remember playing for NSW against the All Blacks in 1988. Our coach said: ‘This haka, boys, we’ve got to confront it. You have to find your opposite number, stand a nose-width away from him and look him in the eyes.’ I remember Nick Farr-Jones saying: ‘We’re not doing that, that’s ridiculous.’ We ended up getting beaten by 50 points but I think today’s players see it all the time. It used to be such a unique thing but they’re used to it. We’ll show respect and then we’ll get on with the game.”

This England team contains better players than people sometimes perceive; the issue has always been keeping them fit, picking the right combinations and finding the best way to maximise their potential. New Zealand have led the world for much of the past decade, but will this weekend and next show that their European rivals are catching up? Quite possibly, but by the time the Twickenham popcorn has been eaten and the auditorium lights extinguished, it is still hard to see the men in black finishing second. – Guardian