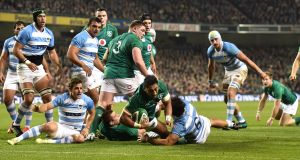 Conditions were perfect and the Pumas brought much of their A game save for their once famed scrum, but on a night when the home crowd were mindful that the main event is a week hence, Ireland probably had to dig deeper than they expected.

Ultimately, they were hugely indebted to a predictably under-strength and under-powered Pumas scrum, which was missing three frontline props, with all three of Ireland’s tries emanating from their dominance in this area.

The lead exchanged hands six times before an initially rusty, error-prone Ireland eventually wore the Pumas down through the accuracy of their carrying and breakdown work, with James Ryan and Bundee Aki leading the charge.

They were also helped by their fitness, some strong impact off the bench and their discipline, conceding six penalties to 11. But they made nine handling errors to four, and sometimes crossed their wires in attack.

In any case, Ireland completed a 10th home win a row, which is a record, and dates back to when New Zealand beat them here two Novembers ago.

Not for the first time in recent years, Ireland were discommoded before the kick-off when Robbie Henshaw withdrew from the starting line-up, apparently with a pulled hamstring. The 26-year-old Ulster close-season recruit, Will Addison, having earned his first cap off the bench against Italy in Chicago a week previously, came straight in for his debut.

The Pumas like to probe in the midfield channels, mostly through Nicolás Sánchez, and the manner they varied the point of their ball-carrying with their mixture of tip-on passes, inside passes and offloads caused the Irish defence problems and gave them plenty of yardage.

So too did the Pumas kicking game, not least the restarts by Sánchez and the box-kicking of Tomás Cubelli, with Jordan Larmour put under plenty of pressure. So too was the Rory Best throw, as Ireland missed the specialist skills of the evergreen Devin Toner, until he came on and steadied matters, and Rob Kearney.

The game was also tarnished by the sight of Seán O’Brien being forced off a minute before half-time with what head coach Joe Schmidt later confirmed was a broken right forearm, seemingly sustained in tackling Tomás Lavanini when the locked dipped with his helmet into the tackle.

With Ireland on the front foot much, much more in the second half, his replacement, Dan Leavy, benefitted from having more opportunities to carry and won a couple of turnovers.

Performing mostly at outside centre this season, Addison has looked a very composed player and had accumulated over 100 games for Sale, where he’d also been captain. A good runner and passer, and assured on the ball, the 26-year-old acquitted himself impressively.

Cleverly, from Argentina’s kick-off, Addison was given three carries as Ireland opted to recycle the ball, although they paid the price for this when Larmour carried and Matias Orlando latched over the ball to win a turnover penalty which the excellent Sanchez landed.

Ireland responded by mauling over the line but the TMO, England’s David Grashoff, rightly decreed there was “no clear grounding”. No matter, as had been expected beforehand, the Irish scrum put down a marker at the game’s first put-in when obliterating the Pumas’ pack in a manner that would have previous frontrowers, not for the first time this season, shaking their heads in dismay. With a penalty advantage and free play, Kieran Marmion darted and ducked for the line, although Sexton mishit the conversion.

More annoyingly for Ireland, Iain Henderson didn’t time his jump from the restart, and Ramiro Moyano gathered on the run to put Argentina on the front foot. When Peter O’Mahony tackled Lavanini off the ball, Sánchez nudged the Pumas back in front.

Argentina are as good as any team in the world at carving openings in midfield, no matter the traffic. There seemed no way through when Sánchez fed his midfielders. Jerónimo de la Fuente shaped to pass to Orlando, but instead straightened through a gap between the re-organised Irish midfield. He swivel passed inside to Orlando, who had switched, and he transferred deftly to Bautista Delguy. Although held up, as was Sánchez by O’Brien, Delguy later had an easy run-in when worked into the corner by Sánchez and Javier Ortega Desio. Some try.

Ireland were stung into their best high-tempo phased attack, and although the Pumas forced a turnover, Pablo Matera again went off his feet. When Lavanini conceded another penalty, Ireland went to the corner, but Ryan couldn’t gather Henderson’s loose transfer, although this merely led to a Pumas scrum – not what they wanted. Once again their pack was dismembered.

Ireland hammered at the Pumas’ line, and Aki broke through only to be stopped dead by Lavanini. But two phases later, Marmion popped loose ball to Aki, and he straightened through to take Matera’s tackle and score. Sexton converted for a 12-11 lead.

Ireland were struggling with the Pumas’ kicking game, and Larmour, conscious he was in his own in-goal area, couldn’t gather a towering up-and-under by Sánchez before Addison gathered the high bouncing ball. Ireland were then indebted to Ryan in forcing a turnover at a Pumas maul when getting his mits around the ball.

Aki undid his good work when hitting Sánchez off the ball, enabling the Pumas’ outhalf to kick them back in front, before the half ended with decidedly in mixed fashion, O’Brien departing to be replaced by Leavy before Sexton landed a monster penalty from almost half-way. A missed drop goal by Sánchez left Ireland a point in front at the end of a fluctuating first half in which the lead had changed hands five times, and Ireland had made six handling errors to one by the Pumas. They were in a game.

On it continued upon the resumption. Leavy hand-tripped Emiliano Boffelli while on the ground for Sánchez to kick the visitors back in front, but Sexton was just short from half-way after an inane hit by Agustin Creevy on Sexton himself.

Moyano broke clean through the home midfield from an inside pass by Sánchez. Ireland, straining every sinew to find some attacking cohesion, worked Larmour into some space up the middle from Ryan’s inside pass. Lavanini was pinged for not rolling away, and Sexton made it 18-17.

Now Ireland went to work, first through an unrelenting 19-phase attack, which got relatively subdued crowd into the game, before Leavy was held up an inch short by Gonzalo Bertraneau. The wilting Pumas stayed down for the scrum, understandably, and when Luke McGrath broke, he stepped Matera – late into position – and with no-one else at home the replacement scrumhalf emulated the starting nine by getting over for a try. Sexton’s conversion made it a two-score game.

Not for long. A big bust by Aki and some deft interplay in a narrow touchline channel between Jacob Stockdale, O’Mahony (twice), Larmour, Leavy and Keith Earls and yet another hit off the ball by Lavanini enabled Sexton to finish the scoring to ensure an 11-point win.

Perhaps a little comfier than this suggests.