Just where has all the argy-bargy gone? 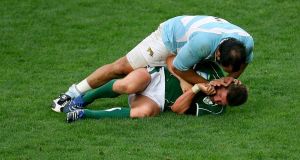 Ieland’s Ronan O’Gara has his face pushed into the ground by Argentina’s Juan Martin Scelzo during the fractious 2007 World Cup clash in Paris. Photograph: Dan Sheridan/Inpho

“There’s niggle all over the place. Bad blood. Two of our lads are gouged. The Argentines makes our lives a misery with their crazy intensity and their refusal to go away and die.” – Brian O’Driscoll, in his book, The Test, on the Ireland victory over Argentina at the 2003 World Cup.

As night falls on the Belfield Bowl, Mario Ledesma is on the phone.

Incessant drizzle sees the hulking Pumas trudge past and onto their hotel ferry. Ledesma used to be among them, he used to put that distinct mug and bald dome at the heart of darkness.

Nowadays the rugged 45-year-old assumes the voice of reason. Memories of Munster wars in Clermont and conflicts at post-match functions make such a notion seem ridiculous.

But talk to the old hooker, Aussie twang from too many days in Michael Cheika’s slipstream, and no menace is detected.

A lovely dichotomy in the previous hour has Ledesma hammering this touring club team, these Jaguares disguised as Pumas, across the slip-sliding UCD surface (we are banished before his infamous collective-breathing scrum clinic).

Waiting for stragglers to board the bus, he is engaging, despite the topic of conversation, even a little loose when remembering the bad old days.

“The special thing was we played each other at three World Cups in a row – really important games. Win and you go into the next round. We got them in ’99 and they got us in 2003 and we got them again in 2007.

“They were big rivalries on the field but outside the field too,” he beams. “A lot of chat going on.”

The off-field animosity spilled into a Dublin night more than once but middle -aged men reminiscing their zenith is all that remains.

Until recently Ledesma and Ronan O’Gara were coaches by trade in France, so hatchets got buried in commonality.

“I think everyone enjoyed it and it is finished now,” Ledesma continues. “After those years I had a chat with Ronan and with Paul O’Connell. It’s all good now.”

The best of times, the worst of times, ran from 1999 to November 2010 – essentially when O’Gara and Ledesma were forced off the carousel.

“The evidence is there,” Wood previously stated. “You see I was lying on my back and he [Grau] drew his hand over my eyes.”

The story of Ireland and Argentina centred around two countries seeking a permanent seat among the established rugby nations.

“There is a certain quality Irish and Argentinean players share,” said Felipe Contepomi recently. “Two proud nations. Even when you take them out of the Irish set-up – look at Donnacha Ryan in Paris – they will play with the same passion. Same goes for us. Now, put 15 of us against 15 of them, all those crazy players, it had to be the way it was.”

The aftermath of an autumn international in November 2004 turned particularly nasty. Here was another razor-tight contest settled by an O’Gara drop goal, which he celebrated like Dorothy in the vicinity of the wicked Ledesma, who was denied retaliation by the final whistle.

Agustin Pichot – the current vice chairman of World Rugby – and Contepomi – who had only recently joined Leinster – arrived into the since demolished Lansdowne pavilion to point the finger at Brian O’Driscoll’s unsporting behaviour. The young Ireland captain, they stated, was trying to hustle Tony Spreadbury into using the sin-bin.

“Ref,” O’Driscoll was picked up saying on the microphone, “This is getting fucking dirty.”

Ireland coach Eddie O’Sullivan claimed six of his players felt the panic that only comes from the fear of gouging.

“Simon Easterby [current Ireland forwards coach] needed stitches after he was gouged in the mouth,” wrote O’Gara in his autobiography. “I was one of their targets and I was lucky that yer man just missed. I ended up with a gash next to my right eye.”

Later that night O’Gara was chatting with Pichot at the bar when Ledesma rolled over to abuse him in Spanish. Another version claims a sharp Cork accent sparked the row. Either way, bigger men intervened.

“When it stays on the field and is all good-hearted it was fun and it’s true we were both striving to be in the tier one. But not only that we wanted to become better teams,” says Ledesma. “Obviously Ireland have done it more consistently; number two in the world and well deserved too.”

But it did spill off the pitch?

“Yeah, kind of, we weren’t that professional at the time. There was a little bit of drinking after the games and stuff and we got a little carried away but it doesn’t happen anymore. It was funnier at the time.”

Fun has many meanings.

“He likes to shed a tear every so often in a team meeting,” said Cheika of the former Wallaby scrum guru before Australia beat Argentina in the 2015 World Cup semi-final. “Just for a bit of fun.”

“He was already coaching,” said Joe Schmidt of his former hooker at Clermont Auvergne. “Whenever Vern Cotter wasn’t there I’d always defer to Mario to drive the pack.”

Contepomi strikes a chord when saying both teams needed to see the other off by any means necessary. That’s the attitude he brought to Leinster under Cheika when a long-running feud was sparked with Denis Leamy and O’Gara after some talk while he place-kicked at Musgrave Park in 2005.

It took four to tango. Contepomi was in the thick of these running conflicts as much as Ledesma, Leamy and O’Gara poured verbal fuel on the flames of a rivalry that peaked during Ireland’s spectacular collapse at the 2007 World Cup.

It begs the questions of Ledesma: How come Argentina had Ireland’s number for so long?

“We were all playing professionally at the time,” he replies. “If you look at the team of 2007 for example – okay, ’99 shouldn’t have happened! – but by ’07 we were all starting in teams in Ireland, England and France.”

And the sweetest victory?

What do you remember about Lens?

“Those last seven, eight minutes that the ref gave them, maybe a little too much? I think nobody wanted us to go forward. When we came to our hotel in Dublin the Irish names were in our rooms! They had prepared to stay in that hotel for the quarter-final.”

The old days have passed but many key figures linger. Gonzalo Quesada, “The Reaper of Lens” wrote O’Driscoll, is seemingly revolutionising the Jaguares/Pumas attack after 11 years assistant coaching with France, Racing 92, Stade and Biarritz.

On this unseemly night in UCD, as Ledesma’s iPhone provides light in the gloom, not 50 metres away we imagine Contepomi poring over film with Leo Cullen and Stuart Lancaster in the Leinster headquarters.

“I think they did [contact Contepomi for information],” smiles scrumhalf Martín Landajo. “I think he is robbing good stuff from here for when he comes back to Argentina!”

Landajo jokes until he doesn’t.

“He will come back.”

Contepomi realised the only way to grow as a coach was to be exposed to lessons outside Argentina. Like when he was a player. Yet that’s no longer the Pumas model. Their hybrid version of the Irish professional structures has the Jaguares functioning as their solitary professional outfit in Super Rugby which is really the national team in different colours.

“It shouldn’t be the same,” says Ledesma. “This should be a greater thing. If we are preparing the same way for Jaguares and Pumas we have got it wrong. Even though we are representing Argentina in Super Rugby we are not playing with our flag on our chests. No, it’s not the same. This is different.”

The bus is leaving without the coach.

Can the former “fun” be reborn?

October 2003, Adelaide – Ireland 16-15 Argentina: Mauricio Reggiardo and Roberto Grau are suspended for eye-gouging as Alan Quinlan wrecks his shoulder slamming down the try that guarantees progress to the World Cup quarter-final, thus denying Los Pumas, in a reversal of 1999 in Lens.

November 2004, Dublin – Ireland 21-19 Argentina: Amidst six accusations of eye-gouging (no citings), Ronan O’Gara’s heel-toe-clicking drop goal celebration enrages the visitors who counter claim unsportsmanlike conduct, levelled by Pichot against O’Driscoll for complaining to the referee, as the animosity spills into the post-match alcohol-fuelled function.

October 2015, Cardiff – Argentina 43-20 Ireland: No niggle, not a trace of bad blood, just a severely weakened Irish XV – with Sexton, O’Connell and O’Mahony injured by the French and Sean O’Brien suspended for touching Pascal Pape – cut to pieces by Argentine pace and panache.