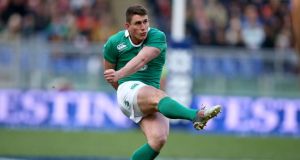 Ian Keatley has been left out of Ireland’s 45-man training squad for this year’s Rugby World Cup. Photograph: Inpho

Notable absentees from Schmidt’s squad include Ian Keatley, who started Ireland’s victorious Six Nations campaign, kicking 14 points in a 26-3 win away against Italy.

Leinster backrow Rhys Ruddock has also been omitted from the 45 after he fractured his arm during Emerging Ireland’s 33-7 win over Uruguay last week.

Jack Conan and Noel Reid are the two representatives from that Emerging Ireland squad to make the provisional cut for the World Cup.

Alongside Conan, Leinster team mate Tadhg Furlong is the only other uncapped player selected.

The squad will begin preparations for the World Cup at the end of June before playing four Tests, starting with a trip to Cardiff to play Wales on August 8th.

On selection of the squad, Schmidt said: “The squad selection has been a long process with some very tight decisions. Some injured players who are getting close to full fitness have been included while others have missed out due to prolonged absence or lack of opportunity to demonstrate their full Test Match readiness.

“Rhys Ruddock would have been selected but has been ruled him out after fracturing his arm against Uruguay last week.”