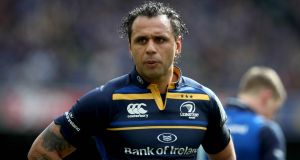 Isa Nacewa probably had his greatest days as a player with Joe Schmidt as his head coach. Following on from their time together at the Auckland Blues when Schmidt was an assistant, in their three years as a player and coach working together with Leinster, the province swept through Europe for two seasons and had the consolation of a Pro12/Challenge Cup double in their third campaign.

Nacewa was garlanded with individual honours and rightly so. He remains, pound for pound, probably the best overseas signing any of the provinces have ever made, or at any rate certainly of those who didn’t go on to play for Ireland. It was Nacewa who labelled Schmidt as “Mr Rugby”, and credited him with teaching him all he knew about back play. Schmidt played him continuously and heaped praise on his fellow Kiwi and Leinster talisman.

That is why Nacewa’s critique of Schmidt on a Sky Sports podcast will cut him so deeply.

“In the 2017/18 season once Leinster started playing an attacking brand of rugby and the majority of the Ireland squad was Leinster based they let a little bit of that Leinster flair infiltrate the Ireland camp,” said Nacewa, effectively saying Ireland’s success was down to Leinster. “Joe started to go away from his tried and trusted drills and introduced a bit of what we call unstructured play. That came into Ireland camp in training and in the Six Nations and they were throwing offloads. There was continuity to their play.

“That got them all the way to the top of the world and an unbeaten year with all the trophies. Post that, I hear they actually went away from that and started to take it back out and went back to the conservative approach and that’s just shone through the whole World Cup and 2019.

“He went back to the tried and trusted of what worked for the last six years and I just don’t think they were expressive enough.”

Yet he continued by admitting: “They didn’t have the right ball players and the likes to play that flowing rugby that Johnny likes to play, likes to drive. They lost key players in certain positions and they just never got their flow on.”

Nacewa would have known Schmidt’s qualities as well as anyone, and must surely have also known that Schmidt is, right now, more broken than at any time in his hitherto brilliant coaching career. As Schmidt admitted in the aftermath of last Saturday’s quarter-final defeat by the All Blacks: “You tend to carry your scars a lot more than your successes and those scars are deep. That’s why I’m a little bit broken.”

This reporter was fortunate enough to be granted an interview nearly every season with Nacewa in his time at Leinster, and found him a warm and very likeable person. He was also, generally, incredibly careful not only about whom he granted interviews to, but measured about what he said in public too. Coming from Nacewa, when he described Schmidt as “Mr Rugby”, it was quite a compliment.

Nacewa’s more recent comments on Sky are in the public domain, and so we are entitled to report them, but they are grist to the mill of those who have an agenda against Schmidt, and Nacewa must also have been aware of this. If I’d been given a list of players who might have made those comments, Nacewa would not have been among them. Well, maybe second last before Johnny Sexton.

If memory serves, Leinster’s successes in their time together were founded on some brilliant attacking rugby, whereas Ireland’s achievements in 2018 were founded more on a highly structured but highly efficient game based on ball retention. Win penalties, kick to the corner, maul, and pound away until they scored, with some clever strike plays thrown in, more than wildly unstructured play and offloads. Ireland made two offloads during the Grand Slam coronation in Twickenham.

Nacewa must also have known that his words will carry so much weight with Leinster supporters, who chanted his name repeatedly, and who adored Schmidt as much. Now they will be divided on this one. As the wonderful player he was, one of Nacewa’s great, great strengths was that he invariably did the right thing. He may even be correct in some or all of what he said. But it’s hard to say he’s done the right thing here.

1 Andy Farrell recalls 13 players to Ireland squad ahead of England clash
2 Tipping Point: Eddie Jones’s rhetoric is out of place in a febrile political climate
3 Eddie Jones continues to revel in putting rugby’s nose out of joint
4 Ireland backrow of O’Mahony, Van der Flier and Stander to be retained against England
5 All in the Game: No Moore medals for Steven Gerrard
Real news has value SUBSCRIBE

Rory McIlroy heads for Mexico with ‘WGC slam’ in sight 16:58
Tiger Roll on track for Aintree after solid run in Navan 16:17
Andy Farrell recalls 13 players to Ireland squad ahead of England clash 15:11
Leaving Cert prep forces Beibhinn Parsons out of rest of Six Nations 15:01
Kieren Westwood: ‘I feel obliged to clear my name and defend myself’ 14:01
Here is your handy guide to sport on television this week