‘You cannot really say if they are first or fifth. It depends on the game day’ 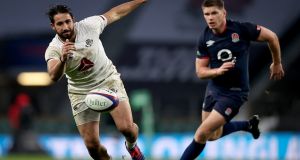 Andy Farrell’s side have suffered a succession of defeats against elite opposition, losing twice to England and once to France since last year’s World Cup quarter-final exit at the hands of New Zealand.

Sharikadze will lead his country out in Dublin on Sunday afternoon (2pm) bidding to spring an upset in the Autumn Nations Cup.

The 27-year-old believes Ireland – ranked fifth in the world – should be considered among rugby’s leading nations, citing contrasting recent results between New Zealand and Argentina to illustrate his point.

“I would say that difference is very close,” Sharikadze said of the gap between Ireland and higher-ranked sides.

“If you take today’s example, we’ve seen Argentina beat New Zealand two weeks ago and today [Saturday] they lost, so you can’t really tell who is a better team. It’s decided in the game day.

“One day Ireland will win and the following week the opposition will win.

“I would say Ireland is one of the top teams in the world, and you cannot really say if they are first or fifth. It depends on the game day.”

Georgia have lost each of their previous four meetings with Ireland and are yet to score a point in the Autumn Nations Cup.

The Lelos went down 18-0 to Wales last weekend, following a 40-0 drubbing against England.

Head coach Levan Maisashvili has made six changes to the team beaten in Llanelli, with Soso Matiashvili and Tamaz Mchedlidze returning to the backline and Shalva Mamukashvili, Nodar Cheishvili, Lasha Jaiani and Tornike Jalagonia coming into the forward pack.

Centre Sharikadze, who has spent his entire club career in France, has called for the team to be more efficient with their chances.

“We need to use our opportunities better. Every time we have an opportunity to score, we need to score,” he said.

“At the moment we haven’t been very careful with that, so we wasted quite big opportunities.

“Hopefully for tomorrow’s game we can be better than that.”