Eoin Reddan could be Joe Schmidt’s most surprising selection

Coach likely to make up to six changes to face Wallabies 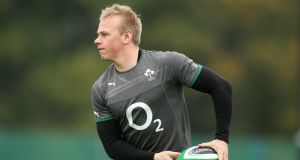 Luke Marshall: poised to win his fourth cap against Australia on Saturday.

A feature of the Joe Schmidt reign is liable to be the way those on the outside, and perhaps more importantly even those on the inside, will be kept on their toes as regards his selections. The new Irish coach is expected to make up to half a dozen changes from the starting line-up that faced Samoa when announcing the side to face Australia on Saturday at lunchtime today.

While it was always anticipated, even from the selection to face Samoa, that a quartet of either under or over-cooked Lions – Cian Healy, Paul O’Connell, Seán O’Brien and Johnny Sexton – would come back into the starting XV, it appears as if Schmidt had another couple of changes up his sleeve.

Schmidt had stated that the choice of Paddy Jackson at outhalf had contributed to picking Gordon D’Arcy’s experience at inside centre but with Sexton restored the indications are that the talented 22-year-old Ulster centre Luke Marshall will be restored for his fourth cap. He last played for Ireland in the defeat to Italy when suffering from concussion in the first half.

Surprising selection
Perhaps the most surprising selection of all could come at scrumhalf, with Eoin Reddan preferred to Lions’ scrumhalf Conor Murray from the start. If this comes to pass it would suggest Schmidt is placing a heavy emphasis on the quickness of the service from the base, and indeed after Reddan’s introduction on the hour last Saturday Ireland scored three of their five tries.

The other selection poser facing Schmidt and his assistants was between Devin Toner and Mike McCarthy as secondrow partner to the restored skipper, O’Connell.

“It is a good thing to have that option. Devin did really well on the summer tour. We put him in charge of the lineout and he stood up and did a really good job and at the weekend he did some really nice things. Then you have Mike McCarthy, who over the last 18 months has really come out of the ground as a latecomer, a late bloomer if you like. He is a workaholic as well and has some mongrel in him,” said Les Kiss.

However, it would appear that they have opted for Toner, who helped contribute to a 100 per cent return from the lineout last Saturday.

Were all this to come to pass, and despite Marshall seemingly coming in for D’Arcy, the side would retain 11 of the starting XV which confronted Australia in the 15-6 World Cup pool victory at Eden Park over two years ago.

In addition to inside centre, the other three exceptions would be Toner, Peter O’Mahony and Fergus McFadden instead of Donncha O’Callaghan, Stephen Ferris and Keith Earls. Murray and Seán Cronin were also on the bench that night.

Jack McGrath is expected to revert to the bench after his man-of-the-match debut last week, and likewise Mike McCarthy, with Kevin McLaughlin favourite to cover the backrow ahead of James Coughlan and Shane Jennings.

Media duties
As indicated by his media duties during the week, Ian Madigan’s versatility is liable to be accommodated on the bench given he can cover outhalf, centre and fullback, while one lively rumour doing the rounds yesterday was that Robbie Henshaw might be preferred to two-try debutant Dave Kearney on the bench.

By contrast, the Wallabies’ starting line-up is liable to have as few as five of the team which kicked off that World Cup pool match, Adam Ashley-Cooper, Quade Cooper, Will Genia, Ben Alexander and James Horwill. There has been speculation that Ewen McKenzie might revert the experienced Ashley-Cooper to outside centre but the coach has strongly indicated he will stick with Tevita Kuridrani.

“It’s a good question for myself. If I take [Kuridrani] out of there then I’m not backing him and he may feel I don’t think he’s up to it. I know they’re not the finished article, but I back them and I’ve been backing them all season and now they’re starting to deliver and enjoy that level,” said McKenzie.

1 Simon Zebo: ‘It’s been tough not being able to put my hand up to play with Ireland’
2 Matt Williams: The economic earthquake for European rugby is coming
3 Cheltenham faces criticism after racegoers suffer Covid-19 symptoms
4 Pat Critchley: ‘You teach or coach the person first and the subject or the game second’
5 Premier League 2019/20: End of season (for now) report card
Real news has value SUBSCRIBE

Sideline Cut: The fascinating final chapter in Tiger’s tale left in limbo for now 09:00
Simon Zebo: ‘It’s been tough not being able to put my hand up to play with Ireland’ 08:00
Matt Williams: The economic earthquake for European rugby is coming 07:00
Sporting Poetry: Seeing far beyond the scoreboard 06:00
Pat Critchley: ‘You teach or coach the person first and the subject or the game second’ 06:00
Here is your handy guide to sport on television this week