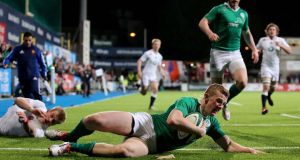 In the end their credentials meant nothing and nor did their size but under-20 world champions England ended Ireland’s winning run at Donnybrook last night in a swinging match.

There was plenty to like about Ireland and perhaps a couple of first-half opportunities that were missed or went to ground cost them dearly in the end.

Ireland certainly showed ambition early on after Garry Ringrose had forced an Irish penalty on the England 22. The quick thinking Ross Byrne looked up and his crossfield kicked caught the England defence napping.

Left-wing Stephen Fitzgerald was underneath it and inches from the England line but the ball bounced off his chest for a knock-on.

But that early enterprise was typical of the first half as Ireland, with the exception of the closing 10 minutes, created the space and threatened the England line, outside centre Ringrose inevitably triggering much of it.

It was Ringrose, who opened up England on 17 minutes, a scything run of 40 metres pushing England into scramble mode. Billy Dardis was on his shoulder but the final pass to right wing Jack Owens found the ground.

Shortly after that Ireland were again sweeping forward, Owens again involved but taken down yards out.

Ireland’s defensive tackling was excellent and there was little evidence of England’s superior physicality. But they crucially kept in touch and as Byrne kicked Ireland’s penalties to keep the board turning over, as did England scrumhalf James Mitchell.

English flanker Will Owen found himself in the bin when Ringrose was first to a loose ball inside the England 22 and flipped it back between his legs. Owen saw the danger and green shirts swarmed forward and killed it, which earned him a rest in the bin.

Irish number eight Lorcan Dow soon followed him on 34 minutes when he snatched illegally at a ball during England’s best phase of the opening 40 minutes.

It was there Ireland showed character and discipline, ironically after the Dow binning. England could smell the try coming but bodies along the Irish gainline hit them back until the ball was hacked away and the teams closed at 9-6, three penalties to two.

England clearly had some dangerous runners, their outside centre Joe Marchant, always looking to take it on. But it was a loose kick and a missed tackle that finally let England in just after the break.

Byrne’s clearance was taken by Piers O’Connor and Owens missed the tackle giving the England replacement open green to run 40 yards in for the first try of the match and take the lead 9-11.

The opening phase of the second half was probably Ireland’s least tight phase, with England in again for a try before an off the ball push causing Stephen Fitzgerald and Zack McCall to collide was spotted by French referee Thomas Charabas.

But Ireland reacted well and within minutes were streaming up the left, Ringrose selling the England shooter a dummy and the ball going wide to Fitzgerald diving in the corner for 14-11.

England kicked for 14-14 when Conan O’Donnell brought down a scrum but it was Marchant who turned the match his side’s way. With the ball fed right in another England attack he dummied man of the match Ringrose and skipped in for 14-19.

The final minutes were frantic and Ireland did work the ball up field, kicking to touch twice from penalties to try and steal a final score. Finally a knock-on and clearance from England earned the territory and with it the match.