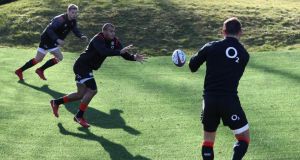 Jonathan Joseph has been recalled to the England side to face Wales on Saturday with Eddie Jones also handing a start to Danny Care at scrum-half. Joseph comes in for Ben Te’o – as predicted by the Wales head coach Warren Gatland – while Care is selected in place of the injured Ben Youngs in the second of two changes made by Jones.

Joseph impressed from the bench in England’s victory in Italy last weekend while Te’o faded in his first appearance for nearly four months. The Bath centre is considered a more accomplished defender than Te’o and in addition is a try-scoring threat, with 17 in his 36 England appearances.

“It’s a gut feeling on my behalf, Ben worked really hard to get back fit, but experience tells me sometimes in their second game back players are a little bit flat,” said Jones. “[Jonathan Joseph] has been in good form in training. He’s powerful, quick and will defend well. He can do a job for us from the start and Ben will come and give us power and impetus, just as he did last week.”

Jones dropped Joseph during last year’s tournament – opting to start Te’o against Italy – and the response was emphatic. Joseph scored a hat-trick in England’s subsequent match against Scotland. He also has form against Wales, scoring a try in Cardiff three years ago in a standout performance that ultimately convinced Gatland he was worthy of a place in his British & Irish Lions squad in New Zealand last summer.

Te’o can consider himself unfortunate to be omitted and England will miss his ball-carry threat but in his 24 Test matches in charge, Jones has largely opted for the centre combination of Owen Farrell and Joseph.

Care’s selection was expected after Youngs was ruled out for up to four months due to the knee ligament injury suffered 10 minutes into England’s 46-15 victory in Rome, while Richard Wigglesworth has been named on the bench and is in line for a first cap since the 2015 World Cup. Care has made only six Test starts under Jones – the most recent of which came against Samoa in November – but was pushing for the No9 jersey against Italy and against Wales he will become England’s most capped scrum-half, eclipsing Matt Dawson’s total of 77.

“It’s very pleasing, his career has flourished, he deserves the honour and I’m sure he’ll make the most of it on Saturday,” added Jones.

Mike Brown continues at fullback with Anthony Watson, fresh from two tries against Italy, and Jonny May on either wing. George Ford is again at fly-half while Dylan Hartley captains the side from hooker with Mako Vunipola and Dan Cole either side of him. Joe Launchbury and Maro Itoje are the locks while Courtney Lawes, Chris Robshaw and Sam Simmonds comprise the back row.

Jones added: “Wales will try and play a particular way but in terms of winning the game we want to make sure our set piece is dominant and our defence is ferocious.” – Guardian service