Matt Williams: This is the worst France team I have ever seen

French rugby was a beacon, but with a lack of world-class players, the light has gone out 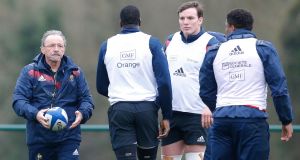 France coach Jacques Brunel and his squad during training. They face Ireland in the Six Nations on Saturday. As my Dad would say, “They are Bob Hope’s brother . . . No Hope.” Photograph: Michel Euler/AP

This is the worst France team I have witnessed in my lifetime.

You may have to go back to the late 1940s to find a French team so bereft of world-class players.

I do not make these statements with any joy. I am a Francophile, and adore the French culture and way of life. In my rugby life, French rugby was the light on a hill. A beacon of Latin creativity, burning brightly with counterattack, offloading and length-of-the-field running rugby.

In the two greatest games I have witnessed, it was the French who transformed rugby into a joyous, spiritual happening. The two Rugby World Cup semi-finals in 1987 against Australia and in 1999 against New Zealand were scripted for French defeat.

The audacious self-belief and creativity that was French rugby made the impossible become truth. France won both games with outrageous flair and panache. To view their play, decades latter, still brings superlatives to mind.

Now that light on the hill is extinguished and the game of rugby is deeply lessened by its passing.

French clubs are flooded with foreign players. A perfect example is Montpellier, who in the recent Champions Cup match against Glasgow selected only five French players. Against Exeter, Montpellier selected five South Africans and three Georgians, and only three French players made the starting team.

French rugby has a magnificent system of academies. Each club has a centre de formation that is centrally funded by the French Rugby Federation (FFR). Unlike Leinster, who have developed and strengthened their academy systems, many French clubs devote the bare minimum of resources to the survival of their centres de formation.

French club presidents are ploughing tens of millions of euro into their clubs. They rightly demand results. The long-term athletic development of French players has become secondary to an ever-growing arms race of buying talent to win matches. The short-term fix of contracting foreign players rather than the long-term development of homegrown talent is across the entire French system. Top 14 and Pro D2 are awash with players from South Africa and the Pacific Islands because they can easily get visas for France.

Over the last decade the three France coaches, Marc Lièvremont, Phillippe Saint-André and Guy Novès were the scapegoats. They were widely abused because of poor results. The real truth, which much of the French rugby community will not face, is that the French rugby system has stopped producing world-class players.

Despite the continued growth in popularity of the Top 14 competition, there are simply not enough quality French players in France.

Until the FFR stops the clubs from importing huge numbers of southern hemisphere players and forces them to invest in developing the ocean of talent that is washing around in their academy system, in both Top 14 and Pro D2, then Jacques Brunel is only months away from following Guy Novès.

The one ace in Brunel’s hand is that Ireland have not a clue how this French team will play. With a completely new staff and many experienced players injured or not selected, France are a strangely unknown quantity.

This will be highly unsettling for Joe Schmidt and his players, who place a very high emphasis on analysing opposition teams. Frustratingly for Schmidt and his team, they have no performance to evaluate, as this French group of players and coaches have never played a game together.

This sad state of affairs in French rugby creates an enormous opportunity for Ireland. It has been decades since Ireland travelled to Paris in the knowledge that if they play to their potential they will win and win well

While Ireland will go into the match with no idea how the French will play, it is highly possible the French players will be in the same position. The reality is, this is a very poor selection of French players, with a coaching team that has been thrown together. The group have had little time to prepare. The French November series was a disaster. There is no evidence that their form will change in the Six Nations.

As my Dad would have said, regarding the French chances of victory, “They are Bob Hope’s brother . . . No Hope.”

Rugby needs a powerful France. The murmuring around the systemic problems have started bubbling, but there is lot more pain for French rugby before the problems are resolved.

This sad state of affairs in French rugby creates an enormous opportunity for Ireland. It has been decades since Ireland travelled to Paris in the knowledge that if they play to their potential they will win and win well.

Over many years the IRFU has invested heavily in its internal systems. Irish clubs and provincial teams are overwhelmingly filled with local talent that has been developed through the schools and academy systems.

Irish rugby has a long tradition of importing new rugby techniques and ideas by contracting quality foreign coaches. The Irish philosophy is simple. Develop local Irish players and import the best technical knowledge from around the world to educate the players and Irish coaches. France has done the opposite, with many foreign players and many French coaches.

For Irish rugby, Saturday has been long time coming. The seeds of its success were planted long ago. With some blood, sweat, belief and passion, a vital victory should go to the men in green.