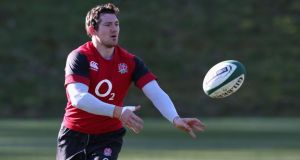 England have made the first changes of their 2015 RBS 6 Nations campaign after naming Alex Goode and Jack Nowell in their starting XV to face Ireland on Sunday.

Goode slots in at full-back after Mike Brown was ruled out of the pivotal title showdown in Dublin earlier this week with the concussion he sustained during the 47-17 rout of Italy a fortnight ago.

Nowell replaces Jonny May on the left wing for his first cap since making his five previous Test appearances during last year’s Six Nations, ending a near year-long absence due to shoulder and knee injuries.

May scored one of the finest tries seen at Twickenham against New Zealand in November, but he wasted a three-on-one overlap against Italy and his defence has long been a source of concern.

In the third and final adjustment to the match-day 23, tighthead prop Kieran Brookes is withdrawn from the bench after failing to recover from a hip flexor strain, giving Henry Thomas his first chance of the Championship.

“Alex is in good form for Saracens and has been training well over the last few weeks, as has Jack Nowell who is also playing well for Exeter Chiefs,” head coach Stuart Lancaster said.

“Both have been pushing hard for selection and I’m sure they’ll seize their chance against a high quality Ireland side.”

1 Madness or defiance? The GAA is taking a huge gamble in staging Championships
2 Seán O’Brien: Anger over my parents’ break-up never left me
3 Munster earn bank holiday bonus in entertaining Thomond Park tussle
4 The Offload: Outgoing Tom Grace will be missed by IRFU
5 Plenty of positives for Farrell as Ireland hit the ground running
Real news has value SUBSCRIBE