Rugby League convert will make his debut against France next weekend 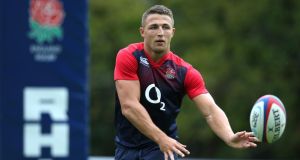 Sam Burgess will make his England debut against France on Saturday with Stuart Lancaster insisting he has earned his place in the team after proving himself on the training field.

Burgess has been picked at inside centre for the first of the three warm-up Tests leading into the home World Cup just 10 months after completing his high-profile cross-code move from rugby league.

The 26-year-old is only under consideration as a midfield option, not at blindside flanker where he played his best rugby for Bath last season, and starts between outhalf Owen Farrell and outside centre Henry Slade.

Burgess is in World Cup contention despite failing to convince in the number 12 jersey at club level, but Lancaster insists he deserves his chance to argue his case for selection in the 31-man squad that must be named by August 31st.

“We will see if Sam can translate what he’s done in training, which is clearly good otherwise I wouldn’t have taken this chance to look at him against France,” Lancaster said.

“I’m open minded about what Sam can do — this isn’t the team that’s going to play against Fiji in our first World Cup game, this is the team to look at options.

“We need a balance in our backline, a balance of ball players, carriers and finishers. Sam ticks the ball carrier box.

“And obviously there’s the physical nature of backlines and you need to look at that element, particularly defensively.

“It’s an option for us to look at and it will be interesting to see how well Sam goes.”

England took the unprecedented step of bringing forward their team announcement for the visit of France to Twickenham by 72 hours, a decision Lancaster explained was made due to the long build-up to the game.

Burgess and Slade are three of four uncapped players in the 23 with Calum Clark starting at openside and hooker Luke Cowan-Dickie featuring among the replacements.

Apart from the centres the remainder of the backline is set to be present at the World Cup, although wing Anthony Watson is the only guaranteed starter when the tournament opens against Fiji on September 18.

Up front several fringe contenders are given the chance to press their claims, among them prop Kieran Brookes, lock George Kruis and Clark.

Tom Wood leads England for a third occasion as a dry-run for the scenario of regular captain Chris Robshaw being struck down by injury and number eight Ben Morgan returns to the back row for the first time since breaking his leg in January.

“Tom has captained England for me before in Argentina and he did a great job. This gives Robshaw another week off,” Lancaster said.

“I’m 100 per cent confident Ben is ready to play the game, but obviously it’s going to be a big step for him.

“He’s training well. He’s confident, wants to play and as a consequence we need to have a look at him.

“In an ideal world you wouldn’t have an eight-month injury but that is what happens sometimes.”

Saturday is the first of two matches against France this month with England travelling to Paris seven days later, before the build-up programme is completed with a fixture against Ireland on September 5.

“We are going out to win the game and we will play with positive intent, a high tempo game,” said Lancaster, who also indicated he will use his replacements bench earlier in the match than usual.