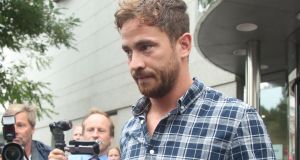 The dishevelled look on Danny Cipriani’s face said it all. Arguably the most gifted England rugby union player of his generation was ushered away from Jersey magistrates court shortly after 10.0am facing the reality that reputations can take years to restore, minutes to rip apart. All the hard work to win his first England start for 10 years – just a couple of months ago – lay quite possibly in tatters.

Oh Danny boy. It was the headline that greeted a wonderful England debut a decade ago and the sighing refrain uttered by even his most ardent supporters as news of Cipriani’s most recent misdemeanour emerged on Wednesday. His ability to command unwanted headlines, to follow a step forward with two back, is matched only by his undeniable talent. The timing of his arrest and subsequent fine for assault and resisting arrest could hardly have been worse considering he has not even yet played for Gloucester, his new club.

On one hand there is a large body of evidence to suggest Cipriani cannot help but attract trouble. He has knuckled down on the pitch and does exude an aura of calm where once there was restlessness, but his career is so littered with off-field indiscretions it is easy to wonder if there is an element of self-destruction to him.

The English Rugby Football Union is not commenting publicly but Cipriani’s England future and his World Cup ambitions – the driving force behind his decision to stay in the Premiership rather than accept lucrative offers to move abroad – now appear to lie in the hands of Eddie Jones. It is the England head coach who must ultimately decide if he is worth the hassle. Jones has welcomed black sheep back in the past but he is only too aware that Cipriani commands attention to the point of distraction, and like no other.

As England’s winning run under Jones unfolded he used to joke about how he was no longer fielding questions as to why Cipriani remained on the outside looking in. It was to the player’s great credit that he forced his way into the England set-up over the summer but Jones greeted the recall with a number of caveats. “If he’s a good character he could be in the team for a long time. If he’s a bad character, there’s always a plane back from Johannesburg.” And then the more ominous sounding “if he’s on the front page for any other reason [other than rugby] he won’t be with us”.

Cipriani will prefer the statement from Jones that “the baggage doesn’t worry me; it’s how he behaves in front of me”, and the head coach made a point of praising Cipriani’s behaviour before handing him his Test recall against South Africa. In the end it pays to remember that one of Jones’s favourite lines is that “life is full of contradictions”.

Even before England left for South Africa, however, Jones had lost patience with questions about the outhalf to the point of hostility, yet his own World Cup ambition may just keep Cipriani’s alive and certainly the 30-year-old’s performance in the third Test against the Springboks will count for something. Jones is pragmatic enough to persevere with Cipriani where his predecessors were not but, if there is any hint of the coach looking for an excuse to omit the outhalf, his England days are over.

Gloucester, meanwhile, have offered their full support to the player, not least because Cipriani’s arrest came during a pre-season tour where team-bonding was more of a priority than rugby. That is not to excuse Cipriani’s behaviour in any way but it seems that every August stories of alcohol-fuelled transgressions surface and such pre-season excursions feel increasingly like an anachronism from the amateur era.

If Cipriani has learned to speak a good game since following up that remarkable performance on debut against Ireland by swearing on live TV, the off-field problems had already started by then. His debut was supposed to be a week earlier against Scotland but the then England coach, Brian Ashton, dropped Cipriani after a photograph emerged of him leaving a London nightclub after midnight.

In October that year he was involved in a training ground bust-up with his Wasps teammate Josh Lewsey and, all the while, high-profile relationships ensured tabloid interest to the extent that Cipriani – out of the England picture – sought refuge from the limelight with a spell in Australia for the Melbourne Rebels. A return to Sale followed but he was struck by a bus during a team pub crawl in Leeds in 2013 and in June 2016 was found guilty of drink driving, hit with £7,620 in fines and costs and banned from driving for 18 months.

If his relationship with Steve Black, formerly Jonny Wilkinson’s mentor, has helped him to stay largely out of trouble since – Cipriani describes the engaging Geordie as his “Super Dad” – then there can be no doubting the role he will have now. As Black told the Guardian in June: “All I ever say to him is that all he can ever control is his personal standards.”

To that end Cipriani will know he has let himself down.