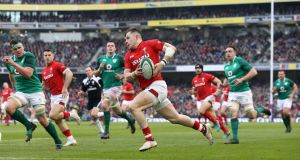 The good news is, at long last, Ireland are scoring tries in the Six Nations. Thirteen in three games.

Put that it in your pipe and smoke it. I told you so. Go look at the scoreboard . . . and any other immature boast you can think of to bolster my long held argument that an attacking mindset and running rugby is what Irish rugby needs for success. Please place these immature but highly satisfying clichés right here.

Here is another fact. All the teams, including Italy, are playing running rugby. The mindset of the northern teams has progressed massively from the turgid performances we had to endure in the Six Nations championships of the past three years. The change has empowered the north to not only bridge the gap with the southern hemisphere, but empowered several teams to accelerate past both Australia and South Africa.

This season’s championship has seen smart, fast attacking rugby, take the place of what I can only describe in Australian terms as “slow, dumb footy”.

Credit must go to Eddie Jones for having the great courage to say he wants to win the 2019 World Cup. This bold declaration has put a fire under the other teams.

It is long overdue for a team from the north to have the courage and ambition to declare that their goal is to challenge the Kiwis. Eddie knows that you cannot get down on bended knee before the New Zealand altar. Too many in the north are on that knee. It is time to stand and fight.

Ireland have benefitted from Eddie’s declaration. They have risen to the English challenge, as have Scotland and Wales.

This healthy competition has produced high quality rugby that was not dreamed of in the horrid rugby mire of the immediate past Six Nations.

With an attacking mindset in all the teams, including Italy, the value of the tournament has returned to that of the 1980s, when it was the supreme international competition. The winner of the 2018 Six Nations will sit close behind New Zealand in the worlds rankings and rightly so.

As of today, that is Ireland.

That is the very good news.

Sorry, but now for a bit of reality.

Without an Irish defensive system that nullifies wide attack it could all be for nothing.

Ireland have let in the tries because they have forgotten that there are 17 defenders on the field: the 15 players and the two side lines.

When Wales attacked wide, the Irish defenders did not force the attackers towards the side line, instead they abandoned their system and jammed in.

A player “jams” in defence when he comes out of the defensive line and moves in towards the attacker.

When the defence has superior numbers in the line, jamming is a good tactic. Superior defensive numbers allow the defence to go up fast and jam in towards the ball, putting the the attack under pressure.

It is the opposite scenario, when Ireland have only a few players defending superior attacking numbers, that they are falling into trouble.

When the Irish defenders face superior attacking numbers they must stay connected in an organised line, with high levels of communication. The defenders communicate in a chain of three, with each player talking to the player on his immediate left and right. The players must then keep hunting from the inside, forcing the attackers towards the side lines.

On every defensive play, the first thing defenders must do, is read the situation

They will concede metres to the attackers, but they will herd them onto the sideline to tackle or force them into touch.

Ireland are not defending in such a manner.

On every defensive play, the first thing defenders must do, is read the situation. What is the attack trying to do? How many attackers are there? How many of my team are in the defending group?

This is called “scanning and reading” the attack. Coaches say, “Put your head on a swivel.” Constantly scan from the ball position through the entire attacking line. Currently in defence, Irish eyes are fixed on the ball, so they are not reading the attacking play, so the decision making process is disjointed. When the Irish forwards are not scanning the attack, they become too tightly packed, leaving large areas out wide with only a few backs to defend.

The backs being outnumbered, are not reading the attack and become unsure of what system to use in defence. The players are not trusting their system to help them solve the problem. They are trying to solve the problem on their own.

Out wide Ireland are defending as individuals not as a team. This has failed and will always fail.

On Aaron Shingler’s try, the forwards’ spacing was too tight, leaving the backs exposed. Then Jacob Stockdale came out of the line and jammed, when he should have stayed in the line and slid. In the Steff Evans try, Jack Conan then Fergus McFadden both jammed. Both tries are examples of multiple system failure.

There is still a long way to travel in this championship.

Unlike Wales, who waited until late in the game to spread the ball , Scotland and England will attack Ireland out wide from the first minute.

Ireland have a week to get their system right.