England collectively outsmart home side as Warrenball meets its match 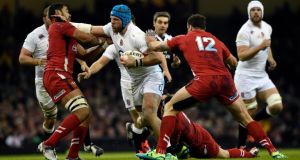 England’s James Haskell is tackled by Wales’ Taulupe Faletu during their Six Nations match at the Millennium stadium in Cardiff. Photograph: Rebecca Naden/Reuters

Wales promised to be different, but words these days mean nothing. It could have been Warrenbull to wrong-foot England with Warrenball always the plan, but there was the unusual sight of the home side running from their own half in the opening minutes, although Jonathan Davies appeared as surprised as those watching and dropped Jamie Roberts’s pass.

It was a night when Wales looked for little things to have a magnifying effect, starting before the kick-off when they left England out on the field to feel the chill of the wind and the crowd. The referee Jerome Garces told Chris Robshaw he could take his players back to the dressing room if their opponents did not materialise on time and it set the tone for the opening exchanges which for the men in white brought back memories of the opening round last year when they were quickly 10 points down in Paris.

Wales were ahead after a minute. Jonny May, ignoring the instructions of his coaches not to give Leigh Halfpenny kicking practice, loitered on the floor after making a tackle and cost his side three points. England had been caught out by Wales’ kick-off, Dan Biggar going short rather than long with Taulupe Faletau claiming the kick and quick thinking led to the first try of the match on eight minutes.

England’s sloppiness in possession cost them a scrum 10 metres from their line but they put pressure on Gethin Jenkins’s side of the scrum where Garces was standing: the squeeze was such that a penalty looked probable, Garces readying himself to blow his whistle, but as the visiting pack focused on the shove, Faletau picked up the ball from the back of the scrum and set off for the line.

James Haskell reacted slowly to the unexpected, going high and late on the number eight. He was easily shrugged off and Jonny May was forced to leave his wing to tackle Faletau. Rhys Webb ran into the vacated space and received the scoring pass, adding a touch of spontaneity to the rehearsed.

Wales were also prepared in defence, expecting their opponents to kick. While Jonathan Joseph caught George Ford’s chip to make his first mark on the game, Biggar charged down two Ford kicks and one from Ben Youngs was also blocked. It was only when England became more direct after the break, keeping the ball in hand and taking the ball through multiple phases – 20 in the move that ended with Joseph slipping through George North’s weak tackle, that Wales started to lose the mental battle.

Wales said they had not uttered the words World and Cup in the two weeks they had been in camp, but the next time they meet England will be at Twickenham in September and they will need to show more to prevail then.

England were playing the smarter rugby and at the point where they collapsed here two years ago, they grew stronger. Wales were under pressure on their own throw throughout. It was only at the breakdown that they enjoyed superiority but, overall, they were out-thought. Guardian Service

1 Simon Zebo: ‘It’s been tough not being able to put my hand up to play with Ireland’
2 Matt Williams: The economic earthquake for European rugby is coming
3 Cheltenham faces criticism after racegoers suffer Covid-19 symptoms
4 Pat Critchley: ‘You teach or coach the person first and the subject or the game second’
5 Ian O’Riordan: Learning to run for the first time all over again
Real news has value SUBSCRIBE

Sideline Cut: The fascinating final chapter in Tiger’s tale left in limbo for now 11:06
Simon Zebo: ‘It’s been tough not being able to put my hand up to play with Ireland’ 08:00
Matt Williams: The economic earthquake for European rugby is coming 07:00
Sporting Poetry: Seeing far beyond the scoreboard 06:00
Premier League 2019/20: End of season (for now) report card 06:00
Here is your handy guide to sport on television this week