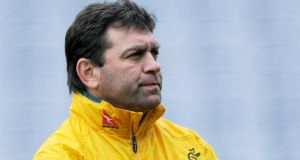 The IRFU will formally announce David Nucifora as the union’s new Performance Director at a press conference in the Aviva stadium on Thursday.

The 52 year old Brisbane native won two caps for Australia at hooker (1991-‘93) and also lined out for Queensland during his playing days.

In 2002 he was appointed coach to the ACT Brumbies, whom he led to the 2004 Super Rugby title, only to be let go in April of that year after a difference of opinion in terms of the direction the franchise should take.

He joined the Auckland Blues as a technical adviser and High Performance manager during Peter Sloane’s tenure, succeeding the latter as head coach (2006). He was joined there by the current Ireland coach Joe Schmidt.

According to reports at the time Nucifora was the victim of a player power coup. He was replaced by the current Connacht coach Pat Lam.

He had applied for and was favourite to get the job of the Wallabies head coach in 2008, a position eventually filled by Robbie Deans, after the latter initially missed out on the New Zealand position.

In 2009 he was appointed the High Performance Manager at the Australian Rugby Union where he also acted as a selector and assistant coach.

Connacht’s Prop Rodney Ah You, who left the field temporarily with a bloody eye in the defeat to Ulster, has recovered fully ahead of the derby game against Munster at the Sportsground on Saturday (6.15).

Fionn Carr took a knock to the knee but the winger is expected to be available ahead of the team announcement on Friday.

Willie Faloon, who was in line to return against his former club Ulster last week but was unfortunate to pick up a slight hamstring strain in the last training run, has recovered to bring himself back in to the frame for Saturday.

Matt Healy and Craig Ronaldson were also welcomed back to team training this week.