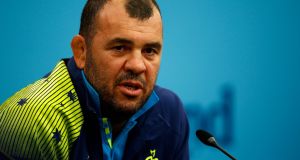 Michael Cheika’s Australia can secure top spot in the pool of death if they beat wales on Saturday. Photograph: Getty

The first press conference Michael Cheika conducted when the Australia squad arrived in London from Bath was at eight in the morning in an oppressively warm room in the basement of their Grange Wellington Hotel in Westminster.

Cheika sat at the top table flanked by Toulon centre Matt Giteau and backrow Scott Fardy. Two issues arose: the overseas players back in the set-up (and Giteau is one) and the Australian scrum.

While Cheika didn’t take credit for the rule change that allowed him to select Giteau and winger Drew Mitchell, it happened that the wheels of change began turning shortly after he was appointed coach last October.

He looks relaxed now but it wasn’t always that way. On his appointment Cheika was thrown a hospital pass, days later taking the demoralised Wallabies to Europe where they won one Test out of four and slumped to sixth in the world, an all-time low. He knew the size of the task.

“From speaking with many of them, I knew they still have a huge desire to represent Australia and would do so to the best of their abilities if called upon,” said Cheika at the time.

He was also working on lock Kane Douglas, who last September signed a three-year deal with Leinster. Again the coach stayed in contact, convincing Douglas to return to Australia. In July of this year, he committed to the ARU until 2018.

Another Wallaby lock, Dean Mumm, was playing in England. Cheika talked him into returning from Exeter Chiefs and Mumm was handed the captain’s armband for Australia’s outing against Uruguay.

Cheika was also working hard on getting his key players to commit to Australian rugby, with Israel Foleau signing a long-term contract. He was slowly restoring belief and respect.

Nothing if not pragmatic, he saw the Australian scrum as a point of concern; the pack needed stiffening, while the backs were not direct in their running.

As Leinster players know, Cheika is old-school tough, a coach who brings a mixture of fear and respect. Australian columnist and rugby commentator Justin Sampson, writing for Todayonline, described what he had been told by a former Wallaby about an early Cheika address to his players.

“I’m not your mother, father, wife, girlfriend or partner, so don’t bring your crap to the office. Leave it at home. When you get here, we work hard but we have some fun at work too,” he said.

To build his team he brought in legendary Argentina hooker Mario Ledesma, as well as former Wallabies Stephen Larkham and Nathan Grey.

Bernard Foley has already credited Larkham for getting him to stand flatter to trigger his running game.

“I guess they’re having fun,” said Cheika at the team hotel, when asked about the scrum. “They are sticking their heads in there and having fun doing it.”

That it had been transformed into one of the best tight units in the game that shoved an English pack around is an astonishing turnaround from last November when it was England’s platform. Australia won six penalties from the scrum in their recent defeat of the World Cup hosts.

Scrum doctor Ledesma came in during the summer, diagnosed and cured the problem. It is one of Cheika’s master strokes. There were casualties. Veterans Ben Alexander and Benn Robinson were jettisoned for Scott Sio, Greg Holmes and Toby Smith.

Ledesma’s philosophy was directing power through the hooker, and he upped the sessions from a tag-on at the end of training to two 45-minute sessions a day.

He says he doesn’t know any rugby other than attacking rugby. He says he encourages his players to make their own decisions on the pitch so long as they back themselves, believe in what they are doing and if they fail, fail better next time. He has brought it back to simple things.

“It’s not robot school,” he told The Age newspaper. “I believe in people having individual character. You want your quiet guy, the lover, the joker, the fighter . . . you need those guys in the team. Otherwise it’s boring.”

Cheika has changed players’ perceptions of themselves and he’s an arch-motivator. But if you don’t work he doesn’t want you around.

So far it’s worked. Australia have gone from shambles to people’s favourites along with the All Blacks.

A decent body of work. All in less than a year.

Dan Leavy could make Leinster return against Zebre 12:47
Tennis clubs in Republic of Ireland to close under Level 5 Covid-19 restrictions 12:02
Pep Guardiola laments Man City’s injury woes 10:26
Roscommon to fulfil Cavan fixture despite Covid-19 case 09:03
Tiger Roll to return on the flat at Navan on Thursday 08:22
Crossword Get access to over 6,000 interactive crosswords