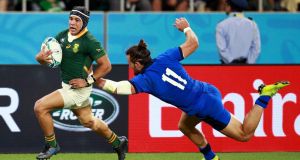 The escalator up the hill to The Ecopa stadium was stranger than usual. Something felt different from last Sunday’s ambush.

This 44,148 crowd was thinner, with more of a global feel and a large splattering of local school children (on comps, we learned, as the World Cup borrows from the John Delaney playbook).

It was cold. As evening fell inside the bowl a breeze signalled the end of the Japan’s Indian summer. Finally, it is October. Five days since the Irish were broken and all the humidity has dissolved.

From now on the rugby will dominate at this tournament. Not excuses about poor officiating. Not brittle bones. Not stifling heat.

A light bulb went off watching the Felix Jones influenced Springboks disembowel Conor O’Shea’s Azzurri; Ireland might be better off not topping Pool A. The ridiculous narrative sprouted by the Irish camp about defeat to Japan being a blessing in disguise might, actually, turn out to be true.

Long before the monstrous RG Snyman arrived, South Africa look unmanageable. Especially with genetically smaller backrowers melting like ice in the morning sun down by the Fukuoka strand.

“They are massive,” said O’Shea. “They are powerful. They’ve got X factor out the back as well.”

Proof was offered by a sixth minute try from the electric eel. Cheslin Kolbe is unquestionably the star turn in Japan. Michele Campagnaro and Matteo Minozi were made to look like fools, rather than world class defenders, by Kolbe’s step and dash. This rare jewel was gifted his first tournament try by Handre Pollard’s skip pass.

So much more magic was to follow but the wing and outhalf are not what impressed in this sequence of events. They were floating on the night air after the Bokke pack obliterated Sergio Parisse’s last stand. The lineout, with Lood De Jager at full stretch looks an impenetrable weapon. If only Ireland had a six foot 10 inch lock at their disposal.

“We play to our strengths,” said Rassie Erasmus.

Eben Etzebeth was also out there despite being under internal investigation by SA Rugby after the country’s Human Rights Commission announced their intent to take the lock to the Equality Court on charges of “physical and racial” abuse.

Siya Kolisi’s men were at their menacing best but the game, as a rugby spectacle, was significantly altered when both Italian tightheads, Simone Ferrari and Marco Ricconi, were forced off injured.

“If it was any other coach I would say it was planned but because it was Conor and I know him well I say it was bad luck,” said the former Munster coach. “He’s a honest man.”

It mattered little to South Africa as they had already built up a 17-3 lead. The second try was a pure power surge as hooker Mbongeni Mbonombi piloted De Jager’s lineout maul over the line.

This is not even Erasmus’ strongest team but he has made a tactical alternation with six forwards on the bench and Frans Steyn covering every slot from outhalf to fullback.

The next flash point was all about Duane Vermeulen. What on earth Andrea Lovotti and Nicola Quaglio were thinking when they picked and plunged the big number eight head first into the dirt will be revealed at a disciplinary hearing in the coming days.

“It could potentially have be [two red cards], just a stupid act,” said O’Shea. “It ended the game. You can’t play with 14 men against that. Our boys are ruined, destroyed, we all are. All the planning and we didn’t get to show our true worth.”

The Italian props put the officials back under the spotlight. Barnes enjoys the glare.

“Blue one is the worse offending of the two,” said the Englisman. “Are we all seeing it? All agrees on these facts? Clear and easy decision, red card, anyone disagree?”

Television Match Official Rowan Kitt could have intervened to ensure Quaglio followed Lovotti off the field. They settled for one dismissal despite precedent from the 2018 under-20s Six Nations when Pierre-Henri Azagoh and Hassane Kolingar received double red cards for tip tackling England’s Fraser Dingwall.

With no scrums and 29 players on the field the contest went haywire with Kolbe inevitably profiting after more slick distribution by Pollard. Intercepts and Hail Mary passing became the trend as Lukhanyo Am eventually picked off loose Italian hands to stroll away for the bonus point try. Then Snyman and Malcom Marx entered the fray, both grabbing scores and embracing like warriors on a bloody battlefield.

Ireland versus the All Blacks please.

Piqué says Barcelona have hit ‘rock bottom’ and need change 08:56
Inside the world’s largest sports air dome just outside Knock 08:30
The weird and wonderful world of Memphis Depay 08:15
Matt Williams: Players’ sacrifice must outweigh the rest of society 07:00
Whereabouts rule harsher on some athletes than others 06:00
Crossword Get access to over 6,000 interactive crosswords