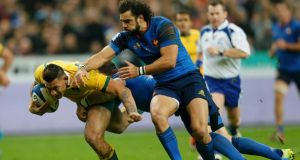 This is the most significant autumn international in many years, yet this match has nothing to do with November internationals.

There are two fine coaches on show, but today is not about Joe Schmidt or Michael Cheika.

It is match full of contradictions.

For Ireland and Australia this match is about the players proving they have the mindset to win through to the final stages of the 2015 Rugby World Cup.

Victory today and Ireland will prove they can defeat two major rugby powers in close succession. This is essential if Ireland are to gain a semi-final place at the RWC.

Defeat will mean Ireland remain a team capable of causing a major upset – but unable to back it up the following week. The win over Australia in the 2011 World Cup was meaningless, as Ireland lost to Wales in the quarter-finals. Consistency of performance is what wins tournaments, not one-off wins.

Historically, Ireland have been incapable of back-to-back wins against the big nations. The defeat of the Springboks was a significant one-off win. To defeat Australia, 14 days later, would be a major statement. This has nothing to do with Joe Schmidt and everything to do with the Irish players’ mindset. Let me be blunt. Ireland will never have a better chance of beating the Wallabies than today.

After defeating France three Tests to nil in June, Australia led at the 70-minute mark in their away fixtures in South Africa and Argentina. They also should have won both the home Bledisloe Cup matches. They were minutes away from winning both the Rugby Championship and the Bledisloe Cup.

That proves this Wallabies side is not far away from being a very good team. Yet from the brink of possible greatness, the Wallabies have created a train smash of their own making. They did not win any of the four matches.

The players’ game management in the final moments of all the Championship matches and their three opening Autumn Tour matches was nothing short of deplorable. This is the players’ problem, not the coach’s problem. Coaches don’t miss tackles or make poor kicks or drop the ball five metres from their own try line.

The players’ relative silence during the ugly and very public end of Ewen McKenzie’s term, tells me that most of the players have yet to take responsibility for their own actions.

I was hoping a Wallaby would stand up and say: “We lost these games because of our poor game management and errors. It is not about the coach”. Sadly, a good man and a fine coach was deserted by his players. Cheika’s appointment may have given the players another easy option to dodge responsibility. All the talk is once again about the coach. We all know Cheika is a fine coach. In the defeat to France, the coach did not miss tackles or drop ball. The players did.

The one plus for Australia is they have nothing to lose. Like Ireland, this is when the Wallabies are at their most dangerous.

They will return to their traditional running game and will try to rattle Ireland’s cage. They will attempt to upset the Irish rhythm. Expect Australia to out-think the Irish tactics of walking away to stop the maul. Look for the lineout jumper to hold the ball and not pass it back, therefore not creating a maul.

Ireland’s wide defence has improved markedly in the past 12 months. Les Kiss has coached well. Ireland will need all that improvement and more because the Wallabies will be attacking the flanks. The Irish centres will need to “Drift like Driccy” in defence. Israel Folau, Tevita Kuridrani and Henry Speight are powerful, wide runners and will target the outside centre channel.

While the Australian wide attack is impressive, their forwards are simply not getting over the gain line when carrying the ball. The selection of Luke Jones and Sam Carter is aimed at improving this problem, but their best ball carriers, like Tatafu Polota-Nau, are injured and in Australia.

The Wallabies are a different beast to the Springboks. If Ireland forget to bring their own running game, like they did against South Africa, they will find themselves chasing the scoreboard. Ireland must use footwork before contact to get in behind the Australian tacklers. That is the key to igniting their offloading. Ireland will have plenty of chances as the Wallaby defensive system is a work in progress, and has more leaks than a Dublin bus shelter.

Australia rarely drop two in a row in the north, yet the pressure is off them and firmly on the men in green. The ARU are broke and the Wallabies are in the middle of an organisational train smash. It can’t get much worse for the them, but I fear it will.

As I said – a match full of contradictions. The 15 men that have the character and the greater mongrel dog mindset will win. The result is leaning towards Ireland, but it is no certainty. It will be fascinating to watch.

Panorama show Mo Farah changed account to anti-doping investigators 14:41
Jack Conan returns to full training ahead of schedule 14:24
Irish Olympic hopefuls fly back from Italy amid coronavirus outbreak 14:12
All in the Game: how Firmino’s agent made him faster . . . on his laptop 14:00
Questions raised over Ireland v Italy fixture due to coronavirus 13:53
Here is your handy guide to sport on television this week