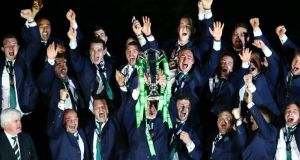 Ireland celebrate with the Six Nations trophy. The joint bid from BBC and ITV may still fall short of the expectations of the three Celtic unions. Photograph: Cathal Noonan/Inpho.

The BBC and ITV have formed an unlikely alliance in a bid to gazump Sky and keep the Six Nations on terrestrial television with an offer worth £50m (€70m) a year. The tournament organiser says an announcement on the new broadcasting contract is imminent and the most financially lucrative competition in the sport outside the World Cup is expected to remain available to all viewers.

The contract with the BBC, which is worth £40m (€56m) a year, runs out in 2017. Sky had been regarded as the favourite to gain the rights after the Six Nations committee revealed that, for the first time, the bidding would be opened to pay-TV companies. It hoped the move would generate a substantial increase in the value of the tournament which the three Celtic unions have come to rely on increasingly to fund professional and amateur rugby in their countries at a time when England, especially, and France are financially buoyant.

The expectation that BT and Sky would bid against each other and force up the price did not materialise. The former, which broadcasts the Premiership and has co-rights for the European Champions Cup with Sky, did not respond while the latter’s offer was deemed to be too low to justify the public outrage, and potential damage to the growth of the sport, that would follow taking the Six Nations off free-to-air television.

The final round of bidding finished last week. The BBC’s offer was less than Sky’s, made just before the British government announced that the corporation would have to pay the £650m (€910m) it costs to supply pensioners over the age of 75 with a free television licence, a sum that is 20 per cent of its central income.

As Sky’s bid was not substantially higher, the BBC opened talks with ITV, regular World Cup broadcasters whose only other foray into rugby is a Premiership highlights programme. ITV had no interest in bidding for the whole tournament but it was prepared to join forces to keep rugby’s oldest international tournament on terrestrial television.

Their combined offer trumped that of Sky, which will lose out unless it comes back with an eleventh-hour, improved offer. It is the organisers’ hope of that which has delayed the announcement after a conference call at the end of last week but with Sky, like BT, reluctant to be drawn into bidding wars after spending billions of pounds on football rights, there has been no response.

If the BBC and ITV succeed in securing the Six Nations rights it may mark a turning point in what has become a one-way flow in sport on television, with subscription stations hoovering up more and more non-protected rights.

The BBC has this year lost the rights for golf’s Open Championship to Sky from 2017 while the Ashes, which starts in Cardiff this week, will be available live only to viewers who have Sky.

While the Six Nations remaining on mainstream television would please politicians and supporters, the Celtic unions will be left to weigh up the cost. They had hoped Sky, which this season won the rights to screen the Guinness Pro 12, would make a significant bid for the Six Nations at a time when the three are having to find extra resources to fund professional teams below international level.

One consequence of the reorganisation of the European Cup last year was that clubs in France and England now receive substantially more income from the tournament, with the proceeds now divided between the three leagues that supply the competitors rather than the six unions the teams come from.

The Pro 12 attracts significantly less television income than the Premiership or the Top 14 in France and came close to losing its two Italian sides, Treviso and Zebre, before the Italian Rugby Federation last week paid money owed to the other three unions after a long stand-off.

With Irish provinces no longer dominant in Europe where France, in the form of free-spending Toulon, have come to hold sway, the Celts, who have won every Six Nations since the last World Cup, are looking to maximise all revenue opportunities and while they will receive more from the Six Nations, it is set to be less than they had anticipated. Guardian Service

1 Munster were fever-tested when they arrived in Italy
2 Gerry Thornley: Wild reactions to this Ireland team as fickle as the wind
3 IRFU not consulted prior to Minister Harris’ recommendation to cancel Ireland v Italy
4 Bayern Munich teach youthful Chelsea a European lesson
5 Crunch time for Connacht as they chase Pro14 dream to South Africa
Real news has value SUBSCRIBE