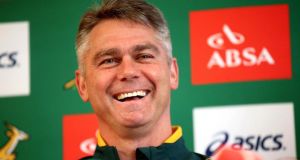 As you’d expect from his passionate, oft anguished, sometimes ecstatic persona in the coach’s box – when being a coach does not appear especially good for his health – Heyneke Meyer is a little different. He is polite, good-humoured and talkative at his press conferences, often coming armed with statistics to back up his points, and accordingly he also has this Sprinboks team playing a little differently too.

The scale of the task facing Ireland on Saturday was underlined yesterday when Meyer predictably confirmed the retention of the starting XV and all but one of the match-day 23 from the 27-25 win which ended the All Blacks’ 22-game unbeaten run four weeks ago in Ellis Park.

This, Meyer informed us, was only the fifth time in his 34- game reign that he was able to retain the same staring XV (the injured tight-head Marcel van der Merwe has been replaced by Coenie Oosthuizen on the bench). He also maintained that northern hemisphere conditions would not temper the ball-in-hand adventure which has characterised not just their past few games but the last two seasons. And, again, he had the stats to prove it.

“But we have to try certain things as well. Obviously, winning is the most important and you have to grind out a win some times as well. But losing two big ball carrying forwards we have to adjust a few things, and play to our strengths” said Meyer in reference to the injured pair of Francois Louw and Willem Alberts.

“We really hope it’s a dry field and we can carry the ball, but we also have to win. We want to use this tour as preparation for the World Cup, so hopefully it will rain once or twice in this month. Last year we wouldn’t have hoped for that, but we have to play in these conditions.”

Central to this expansive approach has been the emergence of the 20-year-old outhalf Handré Pollard, whom Meyer picked away to the All Blacks after scratchy opening wins over the Pumas and losing away to Australia. Although South Africa lost 14-10, he stuck with Pollard and was rewarded with home wins over Australia and the All Blacks, when Pollard scored two tries in his 19 point haul.

“I believe Pollard is a special, special attacking player. He’s big and strong, he can attack the advantage line, and that is what we’ve been trying to do, playing with ball in hand more. By saying that I believe we must not put too much pressure on Handré. He’s 20 and playing against an unbelievably good 10,” said Meyer in relation to Johnny Sexton.

“There is a lot of work still on his tactical and kicking game. That is why I’m putting him under these conditions, where he can learn and again it’s not disrespectful to Ireland, the one thing he brings to our team, which the media didn’t pick up and why Morne didn’t play, is because of his great defence, especially against the All Blacks, who attacked that channel.”

“The thing about Handré, I have been fortunate to coach great 10s, is that although he is just 20, he’s a very good leader. You need that at 10. He’s very relaxed, sometimes probably too relaxed. But that’s the youth. I think he’s a great all-round player and can be a great 12, 13 and 15. So he’s an all-round ball player, big and physical. Mentally tough. The one thing in his game that we keep working on is his tactical kicking. It will come with age. I think he can be a South Afrian captain in the future as well.”

Playing against Sexton will be the ideal test for his young protege. “I just spoke to Handré about that. I truly believe he’s (Sexton) up there with the best. What I like about him he’s big, good defender, great attacker, and he’s a very good tactical kicker.”

“If you look at the Six Nations, Ireland had the best scrum and lineout but the one thing I believe they were way ahead of the rest was their tactical kicking. And the contestable kicking. He’s (Sexton) a very good tactical kicker and one of the dangers is that if he will turn us and put us into the corners it’s going to be a long day. If he plays well, Ireland play well.”

Asked if the Pollard selection was a reflection of a risk-taking coach, Meyer laughed and said: “I would say I am an unbelievable risk-taker but back home people see me as a dull, Afrikaan, stupid, conservative guy so that is a great question. I’ve always been a risk-taker, believe it or not. I’ve always played youngsters. I played Francois Hougaard at 19 and Morné Steyn at 18. If it’s a 50/50 I always go with the youngster who I believe can be superb.”

As for his antics in the coach’s box, Meyer admitted he was, as usual, a little embarrassed at his celebrations after the win over the All Blacks being caught on camera.

“I didn’t want them to show me because I think the players should be the focus,” Meyer said. “I am always ashamed to watch it afterwards. I’ve asked the tv guys not to film me but it’s in their contract. My wife’s not that happy but it makes for entertaining viewing back home.”