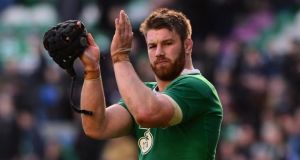 The phoney war continues, although another audition for coveted World Cup places means this is anything but phoney for the protagonists. One- time soldiers-in-arms, Joe Schmidt and Vern Cotter, are both using this game to trial fringe contenders, as each continues the whittling of 46-man squads down to 31. Impressing in training is one thing; performances in matches another.

Each has even picked a debutant in the back-row: Jack Conan for Ireland, and the latest in Scotland’s line of kilted Kiwis, 22-year-old Hugh Blake. For them, and many others in experimental line-ups, this may their only chance to impress.

Although it’s similar with the Scots, the Irish management expect, and want, a stronger showing from a Scottish team that should be more match-prepared than Wales. Last Saturday’s win appeared to leave Schmidt a little underwhelmed on review, but he is looking for the same platform from his pack.

“I think, a little bit similar to last week, we’re looking for a really solid set-piece. If we can get that it allows us the platform to put a few things into place and then we get to examine combinations. There’s nothing worse than having a muddled game and then trying to judge combinations when there wasn’t a lot of fluency available to them.”

The forecast is for cloudy but dry conditions, and with 36,000 tickets reputedly sold, Les Kiss was tasked with the belated hard sell yesterday. Kiss hailed the “fantastic support” around the country at their open sessions, and added: “I know there are some tickets going for this game. Get out there and buy them because I think Scotland, they’re ready to go, and it’s going to be a cracker.”

There will be particular intrigue to see how D’Arcy goes on his 82nd test appearance and 16 years since his debut.

“We were talking about it the other day, 16 years now he’s been putting the green jersey on, which is phenomenal,” said Kiss. “I think one of the key things is that Darce knows how he works, he knows what he has to deliver. It hasn’t stopped him in any way being able to be working with the younger guys and the group around him, and he’s been contributing very strongly in that area, which reflects on the fact that he knows this is a team game.

“If he is to shine, he has to be able to deliver in the systems and that wisdom, I think, will serve him well.”

The team will be led for the first time by Seán O’Brien. “I will just try and do what I do usually, lead by example on the field if I can, do good drills, keep my distance you know, don’t do too much talking to the referee,” he said with a smile. In this, he said he will seek to emulate Paul O’Connell and Leo Cullen.

“It’s always good to have a win. It’s also good to have a performance. There were some aspects we were really pleased with. However, there is some areas we need to be better in. The results don’t guarantee anything next week and the week after. To write Wales off on that performance would be folly and to make us the world champions would be folly. We understand where we sit and we’ll let other teams look after themselves, but ultimately we’re backing what we have done, the experience we have had over the last 24 months or more in our coaching group, and we’re just backing how we prepare and how we look forward and analyse from that.”

The result is not imperative, although there will be an expectancy within and outside the squad that Ireland win again.