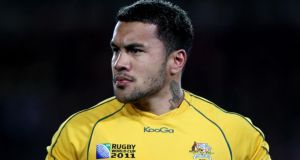 Australia wing Digby Ioane will report to police authorities in Victoria after he failed to attend court over an assault charge. Photograph: David Davies/PA Wire

A warrant was issued for the arrest of Australia rugby international Digby Ioane today just days before the crucial second test against the British and Irish Lions.

The winger, who played in the Wallabies opening test defeat by the Lions on Saturday, failed to appear at the Melbourne Magistrates Court today to face an assault charge relating to an incident in March, Australian media reported.

Ioane, who injured his shoulder in the Lions loss, was training with the Wallabies in Melbourne The Australian Rugby Union (ARU) said they only found out about the issue this afternoon (they are nine hours ahead).

“Since being made aware through media reports, ARU has worked expeditiously with Digby Ioane and Victorian Police to attend to this matter,” the ARU said in a statement.

“Digby will report to Victorian Police and will be issued with a revised court date.”

Ioane, who plays for the Queensland Reds Super Rugby team, was allegedly involved in a scuffle a day after the Brisbane-based side’s win over the Melbourne Rebels on March 8th.

Melbourne police did not charge Ioane at the time but the player was dropped for the Reds’ next match and later charged on summons when he was in South Africa with his club.

Ioane and Pat McCabe have been ruled out of the remaining two Tests against the British and Irish Lions.The pair suffered shoulder and neck injuries respectively during Saturday’s 23-21 defeat in Brisbane and the ARU has announced that they will play no further part in the series.

Berrick Barnes will miss the second Test in Melbourne with concussion, but Christian Leali’ifano could feature after recovering well from his concussion. Adam Ashley-Cooper is also on course for selection against the Lions this weekend after making encouraging progress with his shoulder problem.