‘I know now in hindsight that was wrong. I shouldn’t have been there,’ he said 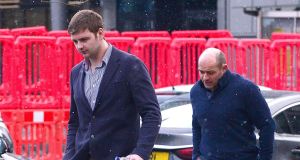 Former Ireland captain Rory Best has expressed regret for appearing at Belfast Crown Court on the first day the young woman gave evidence in the rape trial of Paddy Jackson and Stuart Olding in January 2018.

Jackson and Olding were subsequently found not guilty of all charges.

“It was never, ever my intention to cause any more distress in what was a very, very difficult day for that poor girl anyway,” Best said in an interview with Off The Ball.

On the Wednesday before leading Ireland against France in Paris, Best attended the trial alongside Ulster and Ireland teammate Iain Henderson.

“I know now in hindsight that was wrong,” said Best. “I shouldn’t have been there. I didn’t [take independent legal advice] and that was more mistakes because I think when you’re a reasonably trusting person you kind of think that, ‘Oh look, if they’re saying this then it must be for my benefit.’ It turned out it wasn’t.

“My benefit or detriment was irrelevant to it but it turned it into a circus and it put a lot more pressure onto something that was very sensitive.

“Like I’ve said before, that is definitely the thing that I regret the most and to turn up the magnifying glass on it is just something that . . . I suppose you say you live and learn but this was a big thing you had to live and learn from.”

The 37-year-old now believes that, as the Ireland captain, he became a “pawn” and that it suited Jackson’s legal team to have him attend the trial.

“I’ll be the first to admit that I was unbelievably naive to think that wasn’t the way that it would be brought across. But I can assure you that that was never my intention.

“I look back now in hindsight and I didn’t think of it at the time. I didn’t ever think that it would be that case but there’s no doubt, as you [Newstalk’s Joe Molloy] said yourself, that it suited the [defence] to have me there.

“I think that I became a pawn and that is the bit that, looking back in hindsight, it was bad advice to be there.

“I was, like I say, naive enough to think that I could go there as a friend. I accept exactly what you’re saying and ultimately, you go to all these roles as a captain.

“I don’t know why I thought this would be different. But, look, ultimately I did and that is one of the things I’m very sorry for.”

When it was put to Best that his presence at the trial was another layer of intimidation for the young woman involved, the former Ulster hooker replied: “It was never my intention . . . ultimately, that is the bit I have to live with in that I caused undue stress to people.

“One of the reasons I wanted to step down as captain was from a humane point of view [I was] putting pressure on people and that is not something I would ever want to do.”

In the immediate aftermath of the game in Paris in February 2018, Best stated: “It’s on the record that I have been called as a character witness. And I was advised that it was important that I got both sides of the story so I could make an informed decision about that.”

Best, in a subsequent interview with BT Sport, stood over his decision to attend the trial: “If you have friends that are in trouble and they need a bit of help and support, and if they are promising you that they have done nothing wrong, even though people may not think it’s the right thing to do, I think it is.

“Ultimately, nobody came out of the process a winner in the slightest.”

1 Gerry Thornley: After 32 weeks the Six Nations is back up for grabs
2 Arsène Wenger: Arsenal was a matter of life and death to me
3 Extremes of sweet and sour for Solskjaer as Man United show signs of revival
4 Stockdale and Ringrose on board with expansive Irish game plan
5 Bennett girding his loins for impossibly unpredictable Vuelta
Real news has value SUBSCRIBE