Historical precedent is on their side, but with tough away trips to Ireland and England to come can Wales win their first Six Nations Championship since 2013? John O'Sullivan previews Warren Gatland's team. Video: David Dunne 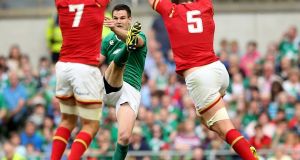 Johnny Sexton: He remains the most important figure in Irish rugby. If he stays fit, if he rediscovers his form, he will make things happen. Photograph: James Crombie/Inpho

Rugby is an odd profession. You only get 80 minutes each week to prove your worth with the rest of the time dominated by recovery and preparation.

There are so many variables that can derail those 80 minutes. You are never fully fit. Some old war wound is always acting up. Emotionally, how are you feeling? Was there an argument at home, with the brother, a friend or just something festering in your mind? Because having a clear head going into a game can be worth more than any amount of hours in the gym.

Avoiding all of these pitfalls becomes a skill in itself. Some lads were brilliant at it while others struggled. Enda McNulty helped me put a pre-match routine in place and I stuck to it religiously. Not so much rituals, just the same actions at the same time leading up to every game. I didn’t slip into a trance or anything; it was all about getting to the state of mind that leads to peak performance.

Not much changed in the 24 hour lead-in to a game, regardless of where I was in the world; the ankles, then shoulders would be strapped. All the small things like that always done at the same time. A cup of tea at a certain point in the day so I could go through trigger plays in my head. These were vital to have memorised. My theory being if I had to think about them in a game it was too late. I wanted to be in motion when my opponent was still contemplating his next move.

These are the micro-seconds that will decide Sunday’s Six Nations game between Ireland and Wales at the Aviva Stadium.

I’ve none of those problems this week from my new side of the fence in Investec (where I do have to perform for longer than 80 minutes each week). What I have really noticed about being out of the loop is the excitement levels of the public. We missed a lot of that cocooned away in Carton House. There was too much at stake to really stop and smell the roses as a player. You are fighting for your position or your next contract negotiation was always just another year away (most of us only got two-year deals).

But I loved all that pressure.

Ireland are entering a Six Nations without Paul O’Connell for only the second time since 2002. This places huge responsibility on the tight five to set the agenda from kick-off; to at least gain parity with a bigger, more experienced Welsh unit.

The key man after that is Johnny Sexton. He remains the most important figure in Irish rugby. If he stays fit, if he rediscovers his form, and providing there is quick ball, he will make things happen.

Johnny possibly needs to start looking after himself more on the pitch. He has been targeted in every game he’s played since returning from concussion, so bravely, against France in Dublin last February.

No player worth his salt wants to be shying away from the physical aspects of rugby. Yet Johnny must adopt a safety -first attitude like you see from many quarterbacks in the NFL. The difference between rugby and American Football is when, say, Justin Tipuric is charging at Johnny he might release the ball to the blind winger or Robbie Henshaw a split second earlier than usual. Just to protect himself.

We’ve all seen how backrowers from Louis Picamoles in October to the Ospreys’ young openside Sam Underhill last month have hit Johnny marginally late but in a manner that confirms the huge price on his head.

Dan Biggar gets it as well. The problem with the two of them is they stand there and take it. They are such competitors that they refuse to back down.

Without the protection of referees we will continue to see years being stripped off the careers of the most gifted players from borderline legal tackles when a Sexton or Biggar attacks the gainline. One penalty from Jerome Garces on Sunday, no need to even sin bin the perpetrator, and that behaviour immediately goes away.

Another aspect of this is the need for Ireland to have a second receiver on the field. Scotland have Finn Russell and Stuart Hogg.

Welsh scrumhalves traditionally share the playmaking role with their 10. England are working it out between George Ford, Andy Farrell and Alex Goode.

That could be solved by Conor Murray taking on even greater responsibility in Ireland’s attack. Maybe Robbie Henshaw could add that element to his game if picked at 12. Or Jared Payne. In many other teams the fullback pops up as first receiver to take that pressure off the primary playmaker.

Johnny knows he still has to tackle Jamie Roberts at full throttle from quick Welsh lineout possession. But there are defensive systems that can be put in place to soften this impact. This is about the movement and actions of the openside flanker and inside centre. When Roberts comes charging, Johnny has two choices depending on who is assisting him. If Seanie O’Brien is arriving off the lineout he will go low and Johnny can go high but if it’s the inside centre then Johnny goes low and Henshaw, or even big Stuart McCloskey, helps to bring him down.

I played that role for years alongside Ronan O’Gara or Johnny. No defensive structure ever wants to be losing two players into a ruck, even off a Roberts charge, so you help each other out. When Roberts used to come steaming down the channel, Rog would go low, I’d go high, and do enough to get him down but also get out of there in a split second as Brian would be screaming for me to be covering his inside shoulder.

That’s where the trust in any partnership comes from. Brian used to know I could assist that first big ball carrier and still escape the ruck to cover him without as much as a glance over his shoulder. If I was dragged to ground, probably because Roberts or whoever took two steps in the initial contact, then David Wallace or Seanie would know to bounce around and fill that space.

It’s intuitive stuff and about getting back into position before the opposing scrumhalf gets his second pass away (or makes a break). No one ever gets it perfectly right but good defences get through a multitude of these double jobs in a game.

They provide the building blocks to achieving the only thing that matters on the first weekend of the Six Nations: victory.

Wales haven’t changed their game plan since the 2010 Six Nations; Bigger is better takes priority over the flowing Welsh wizardry of old. Now, the two occasionally are combined but the priority is to bludgeon. That’s been the Gatland way when capturing the 2012 and 2013 championships. It’s also how they went about their World Cup campaign.

But trying to match the Springboks in physicality in that quarter-final merely highlighted how unprepared the Northern Hemisphere teams are for that sort of attrition on a regular basis.

In contrast, Argentina, in beating us, showed how much they have become used to that brutal intensity. So we are not comparing like with like from north to south. But that can start to change over the coming weeks.

I don’t expect Wales to play much rugby. In defence they will come off the line at pace and in attack they will send the ball deep into our territory with a good chase line to stop us trying to run out of trouble. And hunt turnovers. They arrive in Dublin with a bigger, more experienced pack led by Alun Wyn Jones, Luke Charteris and Sam Warburton.

That, again, puts the onus on Ireland’s forwards to match them. What we immediately will miss this weekend is Paulie’s ball carrying. That must be replaced by CJ Stander or maybe Jamie Heaslip if Rhys Ruddock gets the nod. The balance of the backrow will dictate all that.

To the coaches. My memories of Gatland are of a coach who says very little. He left lads to fill the gaps by being king of the awkward silence. That was his way of reminding everyone who is in charge, which is essential.

Gatland does love his mind games. One year at the Millennium stadium after our warm-up we were jogging back to the changing room and there stood Warren in the corridor telling us that his boys were too big, too fast, too fit for us. All I thought was: strange behaviour. Fair enough, whatever floats your boat, nobody reacted – well, not until we got out on the field. That was never going to rattle us.

By then I was strapped up, my mind fully loaded. I remember we won.

On Sunday, I have a much calmer role doing commentary for ITV. Different and without the euphoric highs, or treacherous lows, I can just sit back and truly enjoy the Six Nations.