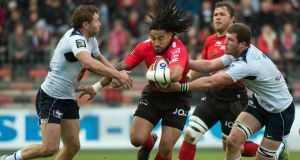 New Zealander Maa Nonu in action for Toulon against Agen at the weekend: what Toulon are doing, while amazing to watch, is concocted in Mourad Boudjellal’s office. Photograph: Bertrand langlois/AFP

With the big picture barely sketched by Leo Cullen and Girvan Dempsey, a trip to Toulon is hardly the time for experimentation. This calls for an accurate, highly focused performance from Leinster.

From any provincial perspective, what lies ahead will be a punishing round three of Champions Cup rugby. Unless the form of all three squads takes a dramatic upswing, it could prove the worst weekend for Irish sides in recent memory.

Munster must unearth the spirit of Thomond Park from years past to stop a very tough looking Leicester Tigers while Ulster have to hope Toulouse don’t warm to Friday night’s game at Ravenhill.

These powerhouse European clubs are daunting enough but it’s Leinster who must produce something to rank alongside their great wins on the road to have any chance at Stade Félix Mayol. What immediately springs to mind is the 6-5 win over Harlequins at The Stoop in 2009 – the ‘Bloodgate’ game – and the 2012 semi-final in Bordeaux when we beat Clermont Auvergne.

That win at The Stoop was the start of something special because we had been on the back foot for the full 80 minutes and survived. The victory sent a surge of self-belief through the squad. From then on, we knew we would be almost impossible to beat. It freed us up to go out and impose our style on the opposition.

That’s what needs to occur this week for Leinster to have any chance.

This journey into the cauldron of the three-time European champions is important in the evolution of this new squad and coaching staff. What rugby player wouldn’t want to be involved in such a challenge? There should be a healthy level of fear but really the overriding feeling will be excitement.

During the World Cup I wrote about what Australia had to do to win the final. Leinster must push the pressure back on to Toulon. Force them to execute at the highest level imaginable and wait for the mistakes.

Because they will come. These guys, while world-class operators to a man, have hardly played together. We’ve seen how badly unfamiliarity hurt Leinster against a well primed Wasps. Toulon probably haven’t done a lot of fitness either.

So there is light at the end of the tunnel. Still, it would be bordering on foolish to predict a Leinster victory either home or back in the Aviva the weekend after next.

But as much as there are ways of winning, there is a way to lose as well. The former requires ruthlessness the latter a lack of any regret.

I saw that Twitter picture of Matt Giteau, Drew Mitchell, Quade Cooper and James O’Connor having a beer after Toulon crushed Agen 53-23 at the weekend. Not that the result worried me. Agen were rubbish, ran out the gate, let Toulon play the way they wanted. But it was a new Toulon. Ma’a Nonu and Mathieu Bastareaud in the centre. Duane Vermeulen, Juan Martín Fernández Lobbe, Mamuka Gorgodze, Romain Taofifenua and Samu Manoa formed a massive five in an incessantly mauling pack. Bryan Habana and Steffon Armitage were launched off the bench. It showed that Toulon have grown some more.

The status quo of European rugby was unmoved by them until five or six years ago. Going back to the signing of Sonny Bill Williams in 2008, they just bought big names and expected them to perform. It was Barbarians stuff.

Then the penny dropped as Bernard Laporte, with club president Mourad Boudjellal’s money, started building a core of internationals who, crucially, stuck around. World Cup winners like Jonny Wilkinson, Juan Smith and Bakkies Botha arrived and immediately bought into what was happening.

But they have purchased all their trophies and it has been detrimental to French rugby. Certainly the national team. There were five French players in the starting XV against Agen – Eric Escande looks a decent scrumhalf, the prop, the hooker, a lock and Bastareaud.

You wonder how they possibly stay within the Top 14 salary cap. Is it really enforced? Does it exist?

The greatest team we will probably ever see dissolved after the World Cup final. I can’t see players of the calibre of Richie McCaw, Brodie Retallick, Kieran Read, Nonu, Williams, Julian Savea, Jerome Kaino, Ben Smith and Dan Carter being part of a team that evolves organically together again.

This is not even the Toulon that beat Leinster in extra-time last season. Vermeulen, Nonu, Cooper and Samoa change their dynamic, arguably improving them.

To expect Leinster to compete year in, year out with Toulon’s seemingly ever increasing budget is unrealistic.

French rugby, for its own salvation, should ensure that a limited number of foreign players are allowed to line out for its club sides. I don’t know if this is at all possible anymore. The clubs may be too far gone and too powerful to stop travelling down the path they are on.

I know they have rules about the number of French players coming through each academy but they find ways around that by nationalising teenage South Sea islanders and Georgians.

It’s all within the rules but is it good for rugby? The English teams are doing something similar and the national team is also clearly suffering, albeit on a lesser scale.

Not that any of this can come in time to help Leinster, Ulster or Munster this weekend. The provinces, one or all of them, have to find a way.

There will always be moments of individual excellence from Giteau or Armitage or Lobbe but they rely on being so physically superior to their opponents that you’ll see individuals walking back into position.

Open them up with a cleverly worked line break and the blame game begins. “That was your man,” says one superstar to the other. And nobody is ever wrong.

Toulon usually stay in the game knowing their individual pace and skill, and their sheer power off a lineout maul will create scores. But stay with them and doubt creeps in. Manufacture enough pressure to make them feel like a bunch of players cobbled together. Only a real team can instil these moments of doubt. Then execute the one or two chances to make it a tight game entering the last 10 minutes.

If that can happen the surviving Leinster players will be teleported back to The Stoop in 2009 or Bordeaux 2012. And the younger lads will follow them. Then it becomes a battle of wills.

Ideally, Toulon will start wondering what on earth is happening. They will get angry and try to smash Leinster’s defence to smithereens.

This is where Clermont failed in the 2012 semi. They never bothered to glance up and see all 15 Leinster players were 15 metres either side of those last few rucks near our try line.

They just kept battering into us, fully confident they would bludgeon a path over our line.

Yet all they needed to do was fling two quick passes for a walk in try.

That day we tackled on suspicion of any Clermont man carrying the ball. When it went two metres from the last ruck to Wesley Fofana I knew he would run that line so I threw a shoulder at him. If I tried to stop him dead he would have carried me over the line. All I was trying to do was dislodge the ball.

Thorn’s clearouts were simply phenomenal. He felt one man should be enough to clear another man at the breakdown. It’s a skill that can be trained but mental fortitude is required: can you put your head where others won’t put boots?

I never saw Brad Thorn lose the “shoulder” over a tackled player. Joe Schmidt always preaches something that Thorn practised with the All Blacks. When entering the scoring zone a team must automatically increase their tempo.

Great things can happen to a team when their backs are to the wall. Especially a team with European pedigree. Leinster mined into that fact for last season’s semi-final. And no must do so again.

When the spotlight gets shined in a player’s face he either performs or slinks back into the shadows. There is enough quality in this Leinster team to expect a huge show of resilience.

Granted, the loss of Seán O’Brien would be huge. Irish rugby just doesn’t have another player like him. The same must be said about Ulster and Iain Henderson. At least CJ Stander is going some way to cover for Peter O’Mahony’s loss in Munster.

But the World Cup toll remains so, so heavy.

So this weekend it all comes back to the mental strength of the collective. Sports psychologist Enda McNulty always speaks about everyone having a singular goal and believing that victory is attainable because pure belief can make you do things in a game that seem telepathic.

I built my career around the single purpose of the squad being everything. And everyone must buy into the simple premise that you are responsible for the man on your left and right in both attack and defence.

The hardest thing in sport is remaining at the elite level. To do that no player can be bigger than the team. Leinster will be tapping into that again this week.

They have been here before. Munster must rediscover the spirit of Thomond Park and Ulster must remind everyone how difficult they are to beat in Ravenhill.

Otherwise this European campaign will be over for everyone before December is out.