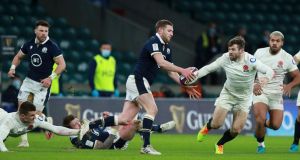 Finn Russell and Scotland will believe they can beat Ireland on Sunday. Photograph: David Rogers/Getty

Scotland, it seems, have become the new barometer by which the Irish rugby team is judged. The two countries were pool opponents in the last World Cup along with the hosts, Japan, and so they will be again in even more shark infested waters at France 2023 given South Africa will be group favourites.

Last year, the Scots bookended Ireland’s calendar, firstly when the hard-earned 19-12 win over Gregor Townsend’s team in the Aviva Stadium ultimately proved the difference between third and fourth, and finally when Ireland won the third-fourth place play-off in the Autumn Nations Cup last December at the same venue by an altogether more convincing 31-16.

Now they meet in Murrayfield on Sunday when the result will go a long way toward defining Ireland’s 2021 Six Nations. Win, and Ireland will finish the weekend in second or third place, with the chance to cement a 20th top half finish in the 22 years of the Six Nations. Lose, and Ireland will probably finish the day in fifth place, with a bottom half finish all but assured.

Furthermore, the result will largely determine whether Andy Farrell’s team finish above Scotland in the table, something Ireland have done in all but one of the previous 21 Six Nations. The only exception was in 2013, when Ireland had their lowest ever Six Nations finish of fifth.

That year Scotland finished third, a Championship high which they’ve managed just four times since they won the last of the old Five Nations titles in 1999. Since then Ireland have won 18 of 22 meetings in the Six Nations or World Cups.

It’s hard to credit that in the 11 years prior to 2000, Scotland won 11 and drew one of the 12 meetings, including a pool win at the 1991 World Cup. This Celtic rivalry has been all but flipped on its head.

However this is widely regarded as Scotland’s best squad in the last 20-odd years and justifiably so. For starters, outhalves like Finn Russell and fullbacks like Stuart Hogg are once-in-a-generation players, certainly so by Scottish standards, as not since their current head coach have they produced real X-factor game breakers like these two.

Both have benefitted from moves to Racing and Exeter, and Hogg has been on fire in their two games to date – man of the match in the win at Twickenham before almost single-handedly dragging his 14-man team into the match against Wales with his second try in that game.

Jonny Gray and Sam Skinner, likely to be called onto the bench in the absence of Richie Gray, are team-mates at Exeter and when was the last time we were able to say a Scottish match-day 23 had three players who were reigning European and Premiership champions? Answer: never.

Hence, just because the provinces outperform Edinburgh and Glasgow in the Pro14 and Europe it doesn’t necessarily follow that Ireland should always beat Scotland. Six of the starting line-up and eight of the match-day 23 against Wales play outside Scotland as, all told, do 13 of Gregor Townsend’s 35-man squad.

The fear in Scotland must be that a once-in-a-generation opportunity has slipped by after that somewhat self-inflicted defeat by Wales. After all, having beaten England for the first time since 1983 at Twickenham they deservedly led Wales 17-3.

Leading 17-8 when camped inside the Welsh 22 in the first 10 minutes of the second-half they turned down three-pointers, bizarrely wasted a penalty advantage with a few one-off runners rather than Russell use his repertoire of tricks with finishers like Duhan van der Merwe, Hogg and Darcy Graham – akin to not gambling with house money.

Even then, if Ali Price had handed the ball to Scott Cummings rather than Gary Graham it would have been 25-8. And even after Zander Fagerson’s red card like Ireland they came back to lead and then, again like Ireland, had the chance to win it at the end when Russell’s offload released van der Merwe.

Out of sheer desperation, Owen Watkin’s diving tap tackle was enough to make van der Merwe stumble just as he was about to veer inside for an untouched run-in under the posts, as the covering last man, Louis Rees-Zammit, had slipped on the Murrayfield turf.

That was assuredly the most painful review any team has conducted in this tournament.

By any stretch of the imagination, Scotland could easily be sitting second in the table on nine points, just two behind Wales with a game in hand (admittedly away to France). Instead, they sit fifth on five points and, come kick-off on Sunday, the likelihood is that Wales will be on 19 points, presuming they’ve picked up a bonus point win in Rome in Saturday’s earlier kick-off. Hence, Scotland will need to beat Ireland, and most probably with a bonus point, to remain in the title hunt.

Incredibly, were Ireland to win and France to come away empty-handed from Twickenham, the only way Wales could be denied the title would be by France winning their last two games with bonus points, although France still look strong enough to win the Grand Slam.

On Sunday, Scotland will still be missing Cameron Redpath, sidelined since an impressive debut at Twickenham with a nerve-related issue in his neck. But such are their midfield options that Rory Hutchinson, in sparkling form for Northampton, and Saracens’ Duncan Taylor can’t even make the squad, and it could be that Sam Johnson comes back in the mix, perhaps alongside Chris Harris, whose strong defensive game has generated real speculation in Scotland that he could make the Lions this summer.

Zander Fagerson will also be suspended, but Scottish strength in depth is much improved, not least in the frontrow, where WP Nel will most probably start at tighthead, with Simon Berghan promoted to the bench.

Furthermore, their abrasive flanker, Jamie Ritchie, will return to the starting line-up after missing the Welsh game, and he had been Man of the Match in the rearranged Six Nations win in Llanelli last October.

He will add a hard edge that was perhaps missing last time out and while the nature of that defeat might have shaken the confidence of some teams, somehow you sense Russell and Hogg aren’t exactly lacking in self-belief.

As is usually the case in recent times, the Scots will firmly believe they’ll beat Ireland next Sunday.