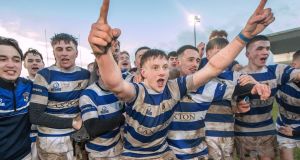 Garbally College’s Seamus Egan celebrates with his team-mates following the victory over Sligo Grammar at the Sportsground. Photograph: James Crombie/Inpho

There’s no stopping Ballinasloe’s Garbally College. The undoubted kings of Connacht schools rugby secured their 48th title, but only after a titanic second-half battle with Sligo Grammar.

The cup holders were on the scoreboard after seven minutes when centre John Devine found the gap to touch down. The pack had done most of the hard work, aided and abetted by Devine’s brother, the energetic scrumhalf Matthew, who had brought play within metres of the line. Two slick passes later Devine raced through for the opening try, with outhalf Cian Treacy adding the extras.

The champions continued to put Sligo under the cosh, and but for a superb tackle, Garbally’s Tom Fitzpatrick would have scored a second try several minutes later.

Sligo, in their first final since winning the crown in 2014, struggled to exit their 22, losing a series of lineouts, thanks to superb disruption by Garbally’s lock David Barlow.

On the third successive steal the Ballinasloe aristocrats made it count and when the ball was sent wide, centre Conor Goode was allowed to race through untouched. Outhalf Treacy added the extras for a 14-0 lead.

Sligo produced their first scoring opportunity minutes later from a penalty to touch but, in their first incursion inside the 22 and having secured the lineout, they lost possession five metres from the line.

They may feel aggrieved that, having gained a foothold in the contest following a rare Garbally mistake, they started to make inroads through a series of penetrating drives, particularly from the pack.

However, having worked their way to within five metres of the posts again, they were eventually pinged for holding on at the breakdown, and the champions were able to relieve the pressure to regain territorial control.

But it was as different story in the second half.

Sligo, through their pack, put the champions under pressure as they once again were prepared to push forward by going through the phases but they lacked the cutting edge to make it count and eventually lost the ball on the line. Minutes later, from a five-metre scrum, good Garbally pressure forced a turnover and once again Sligo were left empty-handed.

In worsening weather conditions and with the wind advantage, Grammar school continued to pin Garbally inside their own half, but they still failed to penetrate the Garbally cover.

No 8 Kacper Palamaraczuk came closest from a series of drives, as did centre Hubert Gilvarry, but after a fourth successive penalty conceded by the champions, Garbally prop Jamie Curley was yellow carded, and referee Shane Gaughan awarded Sligo a penalty try.

It ensured a frantic final minutes to the 2020 schools’ showpiece, particularly when Sligo centre William Whelan raced through to touch down from Feehily’s kick into space. A conversion from Hubert Gilvarry would have sent the game to a replay, but the flags stayed down, and eventually Garbally secured their 48th title.