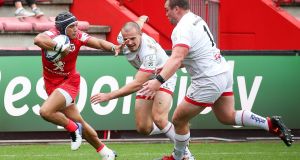 Toulouse played fitfully, meandering between the sublime and downright careless, but the periodic quality more than sufficed to guarantee victory and a place in the Heineken Champions Cup semi-final.

An injury-ravaged Ulster simply could not cope with the internal disruption in personnel terms and the sheer physical onslaught, which inevitably proved a precursor to scintillating passages of attacking rugby from the home side.

The Irish province could not cope with the brutish strength of their opponents’ carrying, the aggressive and corrosive tackling or the individual excellence, particularly in the game-breaking qualities of Toulouse scrumhalf, Antoine Dupont, centre Sofiane Guitoune and wing Cheslin Kolbe.

Dan McFarland lost starting tighthead Tom O’Toole before the game, Marty Moore promoted to the team and Ross Kane to the bench and then after 14 minutes his starting outhalf, Billy Burns; this after the Ulster coach had elected to go with six forwards on the bench.

Sod’s law dictated that it was the backline that ended up decimated by injuries, requiring a periodic reshuffle. They also really badly missed the disparate qualities that Marcell Coetzee and Will Addison would have brought to the occasion.

Against a difficult backdrop Michael Lowry’s performance at outhalf offered a sliver of comfort - the scrum another - on a pretty depressing afternoon physically for the beleaguered visitors. Having switched in from fullback, he demonstrated the vision, footwork, awareness, acceleration and in defence, bravery, that singled him out as a creative touchstone.

It’s a while since he’s played outhalf, but that’s what he is, an outhalf, and this performance might serve as a watershed moment; or at least it should. Ulster’s diligent application and work-rate could not be faulted but the disparity in power and skill was also going to manifest itself on the scoreboard. Toulouse crossed for five tries and it could have been more.

James Hume - he had a fine game in difficult circumstances - took a heavy knock to the shoulder after 70 seconds and while he was being attended, Toulouse attacked in waves, until they manufactured a definitive breach. Thomas Ramos beat three tacklers and from a ruck close to the Ulster line, Antoine Dupont fired a long pass to Cheslin Kolbe, who stepped inside Jacob Stockdale’s despairing tackle.

If the Irish international could do little to stop the Springbok on that occasion as he was racing across with the Ulster defence ‘numbers down,’ he was caught a little flat-footed when trying to defend Kolbe just before the interval when the South Africa danced past him for his second try of the half. It didn’t get better thereafter.

Stockdale’s performance was riddled with errors, high ball, handling, defence and decision-making on an afternoon when his team really needed his best efforts. Ramos, who left eight points behind with the boot in that half, landed the conversion for a 15-3 interval lead.

If there was much to admire in the quality of Toulouse’s opening salvo to the match, their play became a little more ragged as the half wore on and this coupled with Ramos’ fallibility with placekicks meant Ulster almost got to the interval relatively unscathed but Kolbe’s second try was a real slap across the chops.

The Irish province had played some decent rugby in the first half and certainly displayed a sense of adventure when latching onto Toulouse turnovers but were guilty of being imprecise at crucial moments, a forward pass here supplemented by some lacklustre clearing out at breakdowns. It encouraged Toulouse to flood this area with bodies and turnovers ensued.

If Kolbe’s second try was a body blow, then Ulster’s failure to capitalise on a bright start to the second half by scoring points was disappointing. Electing to kick a penalty to the corner, they eventually conceded a penalty when Joe Tekori got over the ball five metres from the Toulouse posts.

It served to rouse the home side, Dupont running a good supporting line to take a scoring pass from the impressive Guitoune and then Connacht old boy, Pita Ahki, demonstrating neat football skills to grubber through and touch down for his side’s fourth try.

McCloskey departed injured between the two tries and the home side added another, Guitoune again the catalyst, Ramos, the beneficiary. Cooney had shifted to the wing - no Ulster back finished in the position he started - and he profited from Lowry’s beautifully judged cross-kick on 71 minutes to scoot down the wing and dot down.

It was a try Ulster deserved for the collective gritty resilience in difficult circumstances even if was wholly cosmetic in terms of the outcome. Hume, Lowry, Cooney stood out, while all the pack produced bit part cameos of quality but the collective cohesion wasn’t there. They were also bullied in contact at times and once Toulouse got quick ruck ball, they raised the pace and tempo of their game sufficiently to ensure their place in the last four of the tournament.