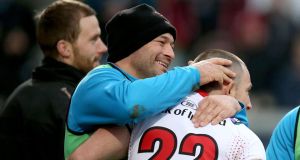 Rory Best congratulates Ian Humphreys after his try for Ulster in the Champions Cup victory over Oyonnax at Kingspan Stadium. Photograph: Dan Sheridan/Inpho

Ultimately, as a place in the quarter-finals was prised from their grasp as the weekend unfolded, Ulster were left to lament previous points that got away before last Saturday at the Kingspan Stadium.

On the day, whatever about the course of their pool campaign, Ulster couldn’t have done much more.

The records will show that Ulster missed a trick by not obtaining a bonus point in the comeback win away to Oyonnax, but the players’ first source of regret, according to their stand-in captain for the day, Rob Herring, was losing their opening game at home to Saracens.

“We want to win our home games to give ourselves the best chance. To not be in these situations at the end of the pool stages, you’ve got to win your home games,” said Herring, who also reflected ruefully on again emerging with nothing in their defeat away to Saracens a week previously.

“Last week, we felt we should have got the bonus point, keeping them within seven. Those are the two disappointments.”

Ulster had kicked off the weekend’s proceedings by achieving their base target of a bonus point by half-time. They maintained their chase for tries with another four in the second half, thereby setting a benchmark of 18 points and a points difference to plus-60 for all other would-be group runners-up to chase.

It had been a party-like atmosphere as a packed Kingspan Stadium reserved their biggest pre-match cheer for the reading out of replacement Rory Best’s name in recognition of his appointment as Ireland captain.

As further evidence of their pride, the loudest roar during the match came with the standing ovation which accompanied Best’s introduction as a 74th-minute replacement.

They had sought to keep as much structure on the game as possible, and as was always going to be the case, left scores behind, indeed failing to add to their tally in the last 19 minutes as their attempts to outflank the blitz defence – which lived offside with impunity – resulted in too much side-to-side rugby.

Even so, restricting Oyonnax to three points and not letting them in for any soft scores when they rallied briefly was also part of the equation, and they achieved that too.

Despite not adding to their 53-point winning margin in the final 18 minutes, as Paul Marshall reflected afterwards, had they been offered that scale of figure at the kick-off, they’d have taken it.

After Best, the second loudest cheer of the day was for Nick Williams in what was his last European appearance for Ulster. Hugely missed as ever a week previously, he was again their prime source of go-forward ball here. He will take some replacing.

There were also fine games by the Marshalls, Paul and Luke, either side of Paddy Jackson, and in the context of the Six Nations, the single most encouraging signals for Ireland came from Jared Payne’s second comeback match, albeit at fullback. And therein lay the rub.

Payne is an integral part of the Irish defensive system at outside centre, but with Darren Cave returning outside Luke Marshall, who has been outstanding at 13, and Stuart Olding on his way back, Ulster’s midfield options are plentiful.

Then again, with Louis Ludik also in situ and Charles Piutai on his way, Ulster have, as Paul Marshall put it, “mouth-watering” options in the future.

Kiss explained Payne’s return at fullback rather than the outside centre position where he has played for Ireland.

“I think coming back from his foot injury, from our and his perspective to start at 15 was a good way to work his way back into the game,” he said.

“He finished the game at 13 and you could see his influence there.

“He is a class player. You could play him at 10 and he would do a job for you and it’s good to have him back not just for us, but for Ireland.”

As to whether Payne flourishes more with the additional space of fullback, the Ulster coach said: “I think when he has the extra space, he plays it exceptionally well. However, I’ve seen enough of him when he hasn’t got that space; he is still very savvy to pick the line he needs. With and without space, he is effective and I think today we have seen both.

“He has enough nous to work the plan in our shape, to release the ball into space and place himself to connect the game into areas where we have numbers.”

Team-mates are invariably effusive about Payne, and Paul Marshall was no different. “He is an incredibly smart rugby player and I think you probably only appreciate that when you get to see him day-in and day-out. His rugby brain is just fantastic, makes right decisions all the time, just sees space whether at 13 or 15, just seems to be gliding on the ball. I think he is a formidable rugby player. He has it all.”

Looking ahead to the remainder of the season, Marshall added: “We want to kick on in the league now and the next five games are probably going to dictate the top couple of teams.

“We want to build on this now and continue to play well and play the way we did today and bring that performance today into the league and climb up that table.”

1 Dan Tuohy explains ‘rotten to the core’ comments
2 Six Nations: No place to hide for Ireland’s misfiring captain
3 Questions raised over Ireland v Italy fixture due to coronavirus
4 England 24 Ireland 12: How the Irish players rated at Twickenham
5 All in the Game: how Firmino’s agent made him faster . . . on his laptop
Real news has value SUBSCRIBE