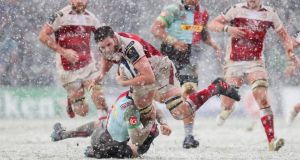 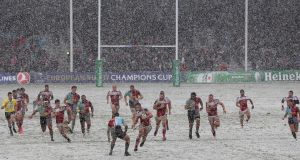 The snow falls during Ulster’s win over Harlequins in London. Photograph: Nigel French/PA

In the midst of a blizzard Harlequins’ European hopes were blown away. They were outthought and outfought by an Ulster side who adapted to the treacherous conditions far better, weathered a brief Quins revival at the start of the second half and kept themselves in front through John Cooney’s goalkicking. It was an arm wrestle, but a thoroughly deserved victory and it reignites Ulster’s hopes of reaching the knockout stages. For Harlequins the game is up.

They had spent two seasons away from Europe’s top table and their return has been forgettable – this a third straight defeat in the competition, registering only through a close-range Kyle Sinckler try. They were not helped by head injuries to Chris Robshaw and Danny Care, but it was a dispirited performance, lacking in the physicality shown against Saracens seven days previously and the wherewithal to cope with snow.

“We are out of it, we are not going to qualify and it has been disappointing,” said the Harlequins director of rugby, John Kingston. “We haven’t been in the competition for three years so you are not going to spring into it and win it. But you must learn your lessons from being in it.

“I’ve no issues with the game going ahead as I played in loads of games like that 30 years ago. But we didn’t react quickly enough to what was needed in the conditions. We were too intricate and needed basic stuff in the first half. However, I thought we were back in with 25 minutes to go but they nailed their chances and we didn’t.”

For Ulster, Charles Piutau, as he always does on the European stage, oozed class while Iain Henderson was a colossal presence in the pack and Jacob Stockdale continues to enhance his rapidly growing reputation, the 21-year-old winger scoring his side’s only try.

It came on 26 minutes, when the snowstorm was perhaps at its worst, and it owed much to the quick-thinking of Cooney, who had already opened the scoring with a penalty. After a slapstick passage of handling errors he pounced on the loose ball and arced his way to the left wing before finding Sean Reidy in support – the flanker then freeing Stockdale, who at more than 16 stone, was not going to be stopped in the corner.

In a clear demonstration of Ulster’s ascendancy, Craig Gilroy began a delightful counterattack from his own line, Piutau’s elusive running also making a mockery of the blanketed pitch on which the lines were by this stage barely visible. Cooney then missed a penalty, as did Marcus Smith for Harlequins, who were reeling from the loss of Robshaw midway through the first half after a clash of heads with Ulster’s scrumhalf.

With the snow relenting, Quins were improved at the start of the second half and Sinckler finished off after a series of scrum penalties near the Ulster line. If Harlequins were on top at the scrum, however, their attacking maul was the bluntest of weapons. In addition, there was a glaring inability to break down Ulster’s defence. Yet still the ball-carriers kept coming when a bit more tactical kicking may have reaped more reward.

Care’s departure certainly did not help – the in-form scrumhalf’s head colliding with team-mate Archie White’s backside – but Ulster, through Stockdale and Piutau, found yards with ball in hand far easier to come by.

Inevitably there were penalties, and three from Cooney in the second half kept Ulster out of reach for a second win in Pool 1. They move above Wasps – who were resoundingly beaten by runaway leaders La Rochelle – and another victory against Harlequins at Ravenhill will raise hopes of reaching the last eight.

“It’s the first of two games and we have to back it up,” said Cooney. “It’s a quick turnaround but we can’t wait for Friday.”

Meanwhile Harlequins, whose day was best summed up when Mike Brown, captain for the afternoon, was nutmegged by a bouncing Piutau clearance, will be left to reflect on how far off the pace they seem to be at this level before focusing on their campaign to qualify again next season. – Guardian service