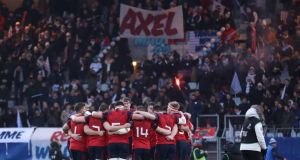 Munster huddle on the pitch in front of tributes to Anthony Foley ahead of last season’s home clash with racing 92. Photo: Billy Stickland/Inpho

This week is a poignant one for all in the Munster set-up. It began with the first anniversary of Anthony Foley’s passing last Monday and culminates in a reunion with Racing 92 on Saturday, a year on from the postponed meeting and the ensuing, emotion-filled win over Glasgow Warriors a day after Foley’s funeral.

From that game onwards, Foley has remained a guiding light, and this Saturday will be no different.

“We speak about Axel all the time,” said Munster captain Peter O’Mahony. “Axel is in the forefront of our minds. Everything we do, every training session, every meeting, there’s something about Axel, maybe not directly, but something that he has done or brought in and has a huge amount of passion for, and we genuinely speak about him all the time. So it won’t be any different this week. We remember him all the time. He’ll always be around.”

Monday’s evocative and raw documentary on RTÉ, Anthony Foley: Munsterman, brought back memories that for all those in Munster scarcely feels like a full year ago.

“There were some good stories and a lot of smiling, but obviously it was difficult at times as well,” said O’Mahony.

“It was nice for people to see a few viewpoints from people they wouldn’t have heard or seen before, and probably get to know Axel a bit differently. You heard some nice stories from people you mightn’t have heard before and I thought that was a nice point.”

The documentary traced Foley’s playing career, right up to the first of their two Heineken Cups under his captaincy and his years coaching in Munster. Nor did it shy away from the last difficult season under his watch before Rassie Erasmus came in.

It replayed the boos which accompanied Ian Keatley’s withdrawal against Leicester in Thomond Park. CJ Stander recalled the insults which were hurled in the stands towards Foley within earshot of his wife, Olive. Niall O’Donovan admitted he filtered many of the letters sent in to Munster. Conor Murray described “the atmosphere around Munster that was a little bit toxic maybe”.

Foley’s sister, Rosie, said to camera: “You can take it from your own but it’s very difficult if your wife, or as started happening, his sons were starting to read things; not nice things being said about their father. That is difficult.”

She added: “Maybe at times during that difficult period he mightn’t have loved rugby as much as he would have.”

Somewhat pointedly, and no doubt with much of this in mind, O’Mahony also said earlier this week: “I thought it was important that they left in some of the things that they did leave in.”

Munster are being portrayed as if in a state of upheaval due to the impending departure of Erasmus and defence coach Jacques Nienaber and arrival of Johann van Graan, although it is as nothing compared to a year ago and Munster seem to have orchestrated as smooth a changeover as possible in the circumstances.

In any event, O’Mahony maintains that while the change has been a major point of discussion within the playing squad, it is still business as usual at the base in the University of Limerick.

“If I was going to be genuinely honest  – and this is speaking very highly of Jacques and Rassie – it didn’t affect us. The lads carried on as if they were staying on. I said over the last few weeks, if you came in over the last six weeks, compared to this time last year, meetings are the exact same.

“The guys are driving it. There was no difference. Jonesy [Felix Jones] and Fla [Jerry Flannery] stood up and took a little bit more onus and the guys gave them a little more work but as I said there was no effect on the players from that side of things. There was a lot of talk about it and that’s something you can’t really get away from but we had our heads down here working away in here.”

To that end, O’Mahony said this week will be about adhering to their processes and “building up a performance” for what is virtually a must-win game after last week’s draw in Castres.

“The fans get behind us, everyone in Munster loves Europe and it’s something that at times you might take for granted but you shouldn’t take it for granted. Guys speak about leaving the jersey in a good place and these are the kinds of evenings when that needs to be done.”

The Parisians, finalists the season before lass when also winning the French Championship, look to be a more dangerous animal this season.

“They are quality, from 1 to 23 whoever comes over,” says O’Mahony.

“But from a forward’s point of view, I think they mauled every one of their lineouts bar one at the weekend, so it is going to be a big physical encounter. It always is with the big French packs. But then they obviously have the class and quality out in the backs as well with finishers like Teddy Thomas. These kinds of operators are world-class so we’re going to have to be very good, but obviously it starts with our pack at the weekend.”