Matt O’Connor under no illusions about job at hand 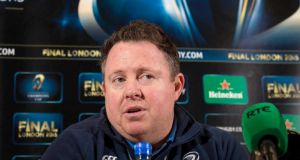 What are Leinster going to do against Bath, Matt O’Connor was asked. It seemed a simple enough question. Were they going to give the Premiership side the first half or the second half of the match they played against Glasgow. The question wasn’t what half Leinster intended to give Bath but what half would they give Bath.

O’Connor warmed to it and pointed to the return of his Irish players, enough of them to provide disappointment’s for some, who may not play this week. Only lock Kane Douglas is in sick bay with hamstring and back issues but otherwise there’s a lack of injuries and a positive ripple in camp.

“Jérôme (Garcès) referees to the team that has momentum. We’ll have to make sure that’s us.”

And there it was, the plan. But it didn’t explain fully Leinster’s bipolar personality that has dogged them throughout the season. The wave of good vibes in having Jamie Heaslip back in the captain’s seat and Rob Kearney, Cian Healy and Seán O’Brien ready to turn to club agendas fell just short of generating full-blown confidence in the audience.

“There were a lot of distractions in the first-half last week,” explained O’Connor. “We got the Test boys back on the Tuesday. We had one session before we played a very good Glasgow side and for whatever reason we were a little off the pace in that first 40 minutes.

“I don’t know whether that was an eye on what happened the week before in the Six Nations or an eye on what was coming this week. We fixed it at half-time and it was a fantastic hit-out in that regard for what we are going to face this week. We had to play all-out for everything in that second 40 and from a mental perspective and a physical perspective it put us in a very good place in that if you are a little bit off you will be beat.”

The challenges are obvious coming from Bath but there are also some unseen threats hidden from view by the sparkle of their backline. The scrum is disciplined and there’s strength scattered in Francois Louw in the backrow and lock Dave Attwood. If we are to believe the believers, such as Stuart Lancaster, they’ve a weapon of mass destruction in league convert Sam Burgess.

“(Paul) James is a good player. He’s added a fair bit of steel to the Bath frontrow,” acknowledges O’Connor. “They are the most rewarded scrum in The Premiership, penalty-wise. Whether he was illegal in the Pro12, or not, he’s certainly fixed that and he’s doing a pretty good job in the Premiership currently.

“They will have blokes that will have a definite plan in how they are going to attack our scrum. It’s just up to us to make sure we can counteract that and try and get dominance.”

It’s worth remembering that 11 Bath players were originally named in the England training squad for the Six Nations match against Wales and the Saxons squad to face Ireland Wolfhounds.

Their backs particularly are what Leinster fear and Heaslip was candid enough about it. He does his homework because as he says: “you don’t want to be caught in a one on one with those backs and not know what they are up to.”

“I think those guys are benefitting from what George Ford and (Kyle) Eastmund have been creating,” says O’Connor. “They tie up a lot of bodies and the defensive focus and that provides spaces on the edge and they are very clinical and getting ball out there.”

There are few surprises anymore, just performance. The second half against Glasgow would probably do nicely.