Former Munster stalwart, now 34, set to be offered a new one- or two-year deal 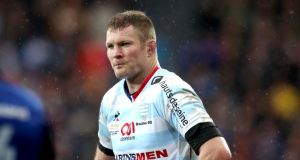 Donnacha Ryan: has been almost an ever-present for Racing 92 this season as he again proves his worth to the French Top 14 club. Photograph: Ryan Byrne/Inpho

Racing 92 are keen to hold on to Donnacha Ryan and are set to table a new one- or two-year contract for the former Irish international.

The 34-year old won the last of his 47 Irish caps against England in the Six Nations in March last year before making the move to Paris.

Ryan, after recovering from a neck injury which delayed his debut for his new club until December last year, became a first-choice player as Racing 92 reached the Champions Cup final.

He has been almost ever-present again this season for Racing and now they are keen to nail him down when his contract expires at the end of this season.

Racing’s new director of sport, former French flanker Yannick Nyanga, said that they were anxious to hold on to the Tipperary man who has pushed on to be one of their leaders.

“He has started the season great again. Time doesn’t seem to have any impact on his performance. He just keeps getting better,” said Nyanga.

“We count on him and he is one of the leaders of the team. We are discussing to renew him for one or two years. We want to keep him.”

Ryan, who will be 35 in December, has led from the front and with Simon Zebo scoring six tries in as many appearances, the former Munster duo are leaving their mark.

Nyanga, who retired after the Champions Cup loss to Leinster in May, said players like Zebo and Ryan are the sort they feel they need if they are to lift that elusive European crown.

“We lack experience at this level even if we played in two finals in the last three season and that’s why the addition of players like Donnacha Ryan and Simon Zebo is a great thing for us.

“When we see the way we lost against Leinster it’s definitely a lack of experience and nothing else. That’s why they are such good additions to us,” added Nyanga ahead of their opening game away to Scarlets on Saturday.

Next weekend they will host Ulster in the second round of the Heineken Champions Cup.