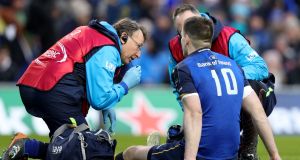 There were multiple head collisions during Saturday’s monumental Champions Cup game at the Aviva Stadium.

Three incidents – involving Johnny Sexton (a concussion), Ross Byrne (who passed a HIA and returned) and Sean Cronin (lost a front tooth but played on) – came under particular scrutiny.

“A lot of people are getting knocks,” said Leinster coach Leo Cullen on Saturday.

“Why are people attracted to the game? Because it is a physical game. It’s amazing the values that are there. Guys are flying into contact areas. They are putting their bodies on the line. But that’s the amazing thing about the game. It is an amazing sport where guys are willing to sacrifice themselves like that.

“That’s why people want to turn up, I guess. As a kid playing rugby for the first time, what did I enjoy about rugby? Going around tackling people! That’s what I enjoyed about it when I was eight years of age.”

Two minutes were played at the Aviva Stadium on Saturday afternoon when Johnny Sexton went in search of his equilibrium after bashing heads with flanker Matt Kvesic. Sexton, who missed 12 weeks in the 2014/15 season following four concussions, wobbled before taking a knee as Exeter’s wave crashed over the Leinster try line.

The referee Pascal Gaüzère confirmed a Head Injury Assessment (HIA) was needed. At half-time, Cullen informed us, Sexton was lucid and even talking tactics with Ross Byrne, his replacement, who passed a HIA when forced off the field in the seventh minute following another collision of skulls, this time with Australian scrumhalf Nic White.

“We’ll see how [Sexton] comes through the different steps of his return to play but he’s okay. He’s out in the corridor chatting to some of the Exeter players. He’s fine.”

Byrne returned to the fray in the 16th minute of this 22-17 victory. White, whose injury was classified as “blood,” returned in the 18th minute only to be permanently replaced on 63 minutes.

Cullen was asked to provide clarity on these incidents and Sean Cronin’s lost tooth following a third collision with Don Armand on 26 minutes.

After a tetchy exchange, in the silent presence of Guy Easterby, Leinster’s head of rugby operations, Cullen eventually delivered a message that parents of young rugby players might want to read.

Leo, did Johnny undergo a HIA or was he just pulled with suspicion of concussion?

“Eh, he went through [the HIA] as far as I’m aware. I’ll have to find out more information for you.”

Ross Byrne, a HIA as well?

So he passed his, obviously?

Cronin, you mentioned his lost tooth, should he have gone off for a HIA?

“You are digging for something.”

The [legal] high tackles, those three [Sexton, Byrne and Cronin], is that a clever way to go about tackling or are they just...?

“No, you are not allowed tackle around the head so it is not obviously a clever way to go about tackling.”

It’s the way Johnny tends to tackle when he is trying to effect the choke, isn’t it?

It’s the standard way, especially when there is a big man coming at him, he targets the ball that way?

Lachie Turner, the Australia international, remaining on the pitch despite blood pouring from his head is mentioned. Is there a worry how the game is being presented in general?

It is put to Cullen that a disconnect exists between those directly involved in the professional game and everybody else who shudders on witnessing big hits.

“Possibly, yeah, but when you look back on the history of the game, all the incidences when people just got up and played on, that doesn’t happen anymore, and rightly so because player safety is paramount.

“Like, our medics are under huge scrutiny all the time. And maybe rightly so. There is a huge amount of pressure on those guys so they are cautious.”

Cullen concluded: “It’s a physical game guys. A physical game. These games they do take their toll. That’s why guys are fully committed and that’s unfortunately what you have to be to still be in the tournament.”