Wasps do Ulster a favour as they surprise La Rochelle 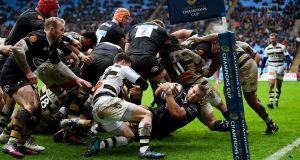 Tom Cruse of Wasps dives over the line to score a try during their Champions Cup win over La Rochelle. Photo: Laurence Griffiths/Getty Images

Historically the fourth round of the Champions Cup tests a team’s mental fortitude and character as much as their rugby abilities, which was the case for Wasps as they looked to exorcise the demons inflicted on them by La Rochelle seven days earlier.

Officially the knockout stages do not begin until April but for Wasps this was knockout rugby in everything but name. Following their 49-29 humbling on the French Riviera last weekend, Dai Young’s side were forced to dig deep to stay in the competition. Wasps were knocked from pillar to post at the Stade Marcel-Deflandre last weekend but still managed to score four tries on limited territory and possession. That was key at the Ricoh Arena on a cold December afternoon with the Premiership finalists of last season fully aware if they could turn possession and territory in their favour they could hurt the French club with their dynamic back division.

Elliot Daly was to be the beneficiary of Wasps’ improved effort, crossing the line twice although the British & Irish Lions flyer left the field injured which would have concerned the England coach, Eddie Jones, with the Six Nations just over a month away.

In typical French fashion the visitors tinkered with a winning side, making eight changes for their visit to Coventry. Following their annihilation in France last weekend the Wasps pack knew they had to respond and to their credit they did. Unlike seven days ago Wasps won the collisions and were able to play the game on their terms.

Young’s side started with great intent, stretching the visiting defence when Ashley Johnson released a sumptuous offload to Dan Robson who raced up the touchline. The ball was recycled before Christian Wade was bundled into touch just short of the try line. Wasps’ ambition finally paid off when Daly crossed in the left-hand corner following a long pass from Robson after the home pack made serious yardage on the gain line.

For all Wasps’ dominance in the first half, however, they held a slender 7-0 lead at the interval. The hosts finally got their just rewards when Daly crossed for his second try following a lovely pass from Kyle Eastmond and a weaving run from Willie Le Roux whose offload put the England man over.

La Rochelle finally got on the board when James kicked a simple penalty following a powerful surge by the former All Blacks winger Rene Ranger.

The Wasps pack’s redemption was complete when Cruse bundled his way over following a powerful driving lineout to close the gap at the top of Pool One to five points.