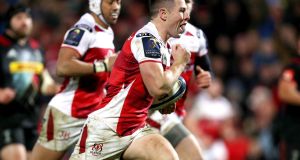 The score-line provided a slight misnomer not in denying that Ulster thoroughly merited their victory but in that their six-try, bonus-point success was less facile than the final margin suggests. A silly yellow card for Harlequins’ tighthead prop Kyle Sinkler on 60-minutes effectively ended any argument as to the winners.

The headlines will be commandeered by scrumhalf John Cooney, whose tally of a try, four penalties and five conversions, helped him to a 27-point haul in an exceptional display of place-kicking but there a handful of other outstanding contributions that illuminated a cold Belfast night, not least Jacob Stockdale’s contribution and outhalf Christian Lealiifano; the latter’s range of passing and vision put his teammates away time and again.

Irish internationals Iain Henderson and Stuart McCloskey were also excellent in a display that was pockmarked by a number of continuing issues with regard to defence. Given the result it’s a minor cavil but won’t be at review time.

Ulster began brightly, Rob Herring was put through in midfield by Christian Lealiifano, the hooker galloped 35-metres and his long pass to Craig Gilroy was accurate but it wasn’t going to be a scoring one as the cover converged on both the passer and recipient 20-metres from the Harlequins line.

Ulster were bright in their intention, players cutting good lines and varying the point of attack intelligently. It took them to the threshold of the Harlequins line. The English club demonstrated that they weren’t risk averse, one glorious cross-kick from their livewire teenage outhalf Marcus Smith from close to his own dead ball line was fielded by left wing Alofa Alofa.

As he scampered down the pitch, Lealiifano’s tackle and penalty turnover was timely, representative of the quality of his general play. John Cooney kicked two penalties to reward Ulster’s endeavour and things seemed set fair for the home side; until the 13th minute when Charles Piutau’s pass was intercepted by Harlequins number eight Renaldo Bothma on the halfway line.

Gilroy chased and cut him down but from a quick recycle, Smith’s nifty footwork left Cooney clutching air and the visitors had a first try. Ulster’s response was forthright. Lealiifano was again the catalyst, his cross-kick, was volleyed by McCloskey and the centre showed good toe to dot down millimetres shy of the dead ball line for a superb try. Cooney kicked the touchline conversion.

The home side inexplicably become ragged on both sides of the ball, losing concentration, communication and spacing in their defence and failed to heed a couple of narrow escapes before the visitors grabbed a deserved second try.

Smith’s glorious line break was finished by Charlie Walker, the wing denied a minute earlier in the corner, but this time given the freedom of Belfast; he had time for a swan dive as he touched down under the posts, the outhalf’s conversion a formality to bring the English club back to just a single point behind at 13-12.

Cooney’s third penalty on 33 minutes proved the final score of a half that began so promisingly but degenerated into a mishmash of basic mistakes. A priority would have been to sort out the defensive re-alignment and speed (over 20 missed tackles in the half), address a misfiring lineout and look to ensure that line breaks didn’t flounder through a lack of both support runners and players to clear-out at the breakdown.

The outcome was effectively decided by the intervention of one player and it proved to be Ireland and Ulster’s man-of-the moment, Stockdale. Coming around from his blindside wing, he made the initial breach and while Lealiifano’s cross-kick wasn’t the right option, Ulster re-gathered possession and it eventually culminated in Gilroy squeezing in at the corner; he did extremely well. Cooney added the touchline conversion.

On 55 minutes Stockdale again provided the architect again sweeping around from the blindside wing and racing through a gap. His switch pass to Gilroy was as sharp as the latter’s angle of running and when grounded a couple of metres short, Cooney flicked up the quick ball to Piutau, the fullback stepping through the remnants of the ‘Quins’ defence. Cooney was unsuccessful for the first time on the night with a tricky conversion.

The home side conceded a soft try to Ross Chisholm and lost Piutau to injury but the irrepressible Stockdale decided to offer another sumptuous example of his talent, leaving defenders rooted helplessly as he slalomed in and out to shred the Harlequins cover; Alan O’Connor was the principal beneficiary and try scorer.

Cooney converted as he would do again after he scored a try of his own on 71 minutes - Ward had touched down for Harlequins’ fourth in the interim. Andrew Trimble’s try in the final minute provided the gift-wrapping, Cooney’s beautifully struck conversion the perfect footnote.