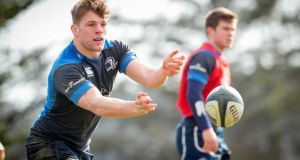 Jordi Murphy is set to start for Leinster against Bath in the Champions Cup. Photograph: Inpho

Mike Ross is poised to return at tighthead prop with Jordi Murphy to wear six in a backrow alongside Sean O’Brien and Jamie Heaslip.

Ross is struggling with an ankle problem but Kane Douglas’ hamstring strain is a more serious concern for O’Connor. However, Eoin Reddan is on course to pass the Head Injury Assessment protocol.

Ross’ form throughout the Six Nations appears to have changed O’Connor’s mind regarding selection. In January the 35 year old was dropped from the match day squads for victory over Castres and the draw with Wasps. Marty Moore started those games with the increasingly impressive Tadhg Furlong coming off the bench. Bath’s heavily weakened scrum, they are without England tight heads David Wilson and Henry Thomas, increases the importance of Ross’ scrummaging.

Cian Healy, Seán Cronin, Mike McCarthy and Devin Toner will make up the pack with Douglas aiming to be fit enough to provide second row cover.

Shane Jennings, who retires after this season, is in a serious battle to make the squad ahead of Dominic Ryan and Jack Conan. Or as Jennings has christened them, the first generation of “genetic freaks that are coming out of school into the academies.”

Rhys Ruddock is already ruled out with a recurring arm injury.

Ian Madigan and Jimmy Gopperth will keep the vastly experienced Gordon D’Arcy on the bench. That Ben Te’o has started the last five matches at outside centre is an indication he will go head to head with his former South Sydney Rabbitohs teammate Sam Burgess.

Luke Fitzgerald wore 13 against Wasps but has since reverted to left wing for both Ireland and Leinster as Te’o shows signs of adapting to the nuances of rugby union. Still, his selection in such a pivotal defensive position is a big risk by O’Connor.

Rob Kearney will play fullback meaning one from Fergus McFadden, Zane Kirchner and Dave Kearney will miss out entirely.

Meanwhile, Ulster number eight Nick Williams will miss the rest of the season after receiving an eight-week suspension for striking Cardiff Blues outhalf Rhys Patchell at Ravenhill last Friday. The 31-year-old was sin-binned after the incident in the sixth-minute. Patchell received on-field treatment and spent a night in hospital as a precaution.

Cited under Law 10.4(a) the disciplinary committee, chaired by Roger Morris from Wales, “found that the incident was at the top end of the World Rugby sanctions for this type of offence, meriting a 16 week starting point.”

The statement continued: “Taking into account the matches remaining this season, and two warm-up matches scheduled for the start of next season, Nick Williams is free to resume playing from Monday, 1 September 2015 and has the right of appeal.”

Ulster also lost Stuart Olding (knee) last Friday for the season but Chris Henry did return, following heart surgery after he collapsed on the morning of Ireland versus South Africa last November.

5 Paul Murphy takes over from David Clifford as Kerry captain

Paul Murphy takes over from David Clifford as Kerry captain 20:33
Lampard afforded precious little time to pull out of nosedive 20:37
Joe Marler rules himself out of England’s Six Nations campaign 18:27
San Francisco 49ers increase stake in Leeds United to 37 per cent 18:10
Jockeys shocked and appalled at Viking Hoard case 17:00
Crossword Get access to over 6,000 interactive crosswords