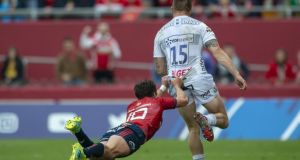 Jason Woodward of Gloucester is tackled by Joey Carbery of Munster during the Heineken Champions Cup match between the teams at Thomond Park on October 20th Photograph: Andrew Surma/NurPhoto/Getty

Ever the drama kings, Munster couldn’t do it the easy way.

If it’s January, it has to be a white knuckle ride to the Heineken Champions Cup qualification line, but if history has taught us anything it is that when cornered, Munster usually come out swinging.

In truth, this pool was never likely to be easy for any of the quartet, and as events have transpired, unlike the two-horse races elsewhere, each of the four protagonists in this group are still in the race.

Gloucester and Munster have a storied history in this competition and everything is set fair to provide another memorable chapter in its own right. Each are locked and fully loaded, with Danny Cipriani back from injury and Chris Farrell unexpectedly declared fit, which is a huge boost for Munster.

Johann van Graan makes six changes from the side which beat Connacht 31-24 in the Sportsground last Saturday, with Mike Haley, Rory Scannell, Conor Murray, Dave Kilcoyne, Stephen Archer and CJ Stander all coming into the starting XV, and Andrew Conway reverting to the wing.

Rhys Marshall, sidelined since the victory at home over Gloucester last October in round two with a torn hamstring, returns and is named in a fairly strong bench.

For their part, Cipriani brings an entirely different, 20-metre passing range and dimension to Gloucester’s game, as well as his unpredictability. For the first few months of the season on the weekly BT packages of Premiership highlights, the pass of the week may as well have been entitled the Cipriani Pass. He is evidently too maverick-like for Eddie Jones’ taste, but he’s dangerous and an undoubted match-winner.

Gloucester will be smarting from their limp defeat in Leicester, and winger Ollie Thorley, another dangerous runner, especially in broken play, also returns.

Henry Walker comes in at hooker and Ed Slater at lock, with Franco Mostert moving to the blindside, while Lewis Ludlow is also back at openside flanker, and replacement hooker Franco Marais returns on the bench.

The Cherry & Whites will also take plenty from their 36-22 defeat in the first meeting in Thomond Park, both a sense of vengeance and encouragement.

Despite an early sin-binning for Tom Savage and a red card for Danny Cipriani, which meant they played over an hour of the game with 14 men, Gloucester responded to going 36-10 down a dozen minutes from full-time to score two late tries.

They blow very hot and cold, as they showed in beating Exeter away and then losing at home in the back-to-back rounds, and they have lost their last two games. But on their day they look the best of the rest in England outside of Saracens and Exeter. A change in competition is also usually re-energising, and this is something of a free hit for them.

By contrast, Munster arrive on the back of two wins, and in a good place. They have the scrum power, lineout and mauling game, along with the competition’s best scrumhalf in Murray, to impose themselves on the road in a way that not every team can do.

Peter O’Mahony is having one of the seasons of his life, and having a refreshed O’Mahony back has an almost O’Connell-esque effect on the backrow, over whom you could have thrown a blanket at times last week in Galway.

Farrell’s presence adds another dimension to their attacking game, both with his carrying and deft passing game. Remarkably, this will be the first time Munster can field their optimum backline, and specifically the 9-10-12-13 axis of Murray, Joey Carbery, Rory Scannell and Farrell.

Carbery’s awry place-kicking in Castres looks, and will hopefully remain, a blip, and along with Scannell and Farrell, they also have a strong kicking game to resort to when the Gloucester defence is holding firm.

That said, a capacity Kingsholm on a Friday night under lights, with the prized scalp of the two-time Heineken Cup winners coming to town, adds to the potency of the occasion, as does the presence of Romain Poite. Munster have history with the French official. They’re not alone. Most teams do. He’s the boss. He tends to be a factor.

His presence adds to the feeling that Munster will need to ride a few storms, for as much as anything, this will also be a test of their temperament and discipline. Heineken Cup away games in feverish full houses tend to be.

Munster were ruffled in Castres, but appeared to apply those lessons to good effect against Leinster and Connacht. If they keep their cool, and Carbery nails his kicks, they can keep the scoreboard ticking sufficiently to ride this one out.

1 Trump endorsement by Jack Nicklaus leads to avalanche of dismay
2 Ireland fall short against France as England win Six Nations title
3 World Handicap System: What is it? How does it work? Will my handicap change?
4 Jota forgets penalty miss to steer Liverpool past West Ham
5 Galway expose Wexford’s lack of Plan B to reach Leinster final
Real news has value SUBSCRIBE