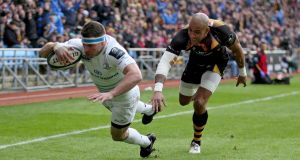 Having led 20-6 lead at half-time, at which point they should have been out of sight, Leinster let slip that winning platform to such an extent they were left hanging on at the end as Andy Goode’s drop goal attempt with the game’s last act sailed wide to ensure Leinster at least progressed to the last eight as Pool Two winners.

Wasps themselves edged out Harlequins, who had a bonus point win in Castres, by dint of their superior head to head, while Leinster’s hopes of securing a coveted home quarter-final hangs on the rest of the weekend’s results.

With the winners of the Northampton-Racing and Clermont-Saracens shoot-outs set to secure home advantage in two of the quarters, the likelihood is that Toulon will as well by beating the Scarlets. Thus, Leinster will be left hoping that Montpellier deny Toulouse a bonus-point win, and that Glasgow do likewise away to Bath tomorrow.

It should never have come to this. Leinster butchered several try-scoring chances in addition to the brace they took, and they will also rue four uncharacteristic missed penalties by Ian Madigan and a wayward drop goal by Jimmy Gopperth, before crumbling a little in the last quarter.

Their failure to win and ensure a home quarter-final was compounded by injuries to Dave Kearney (shoulder), Eoin Reddan (knee) and Jamie Heaslip. The downside to the performance was some decidedly thinnish looking defending and missed tackles, which gave Wasps intermittent hope despite being generally on the back foot.

Helped by a rapid yellow card for the home flanker Ashley Johnson, Leinster were quick into their stride and led from first minute. With players such as Marty Moore, Jordi Murphy, Reddan, Luke Fitzgerald, Dave Kearney (though he wouldn’t last long here), Fergus McFadden and Rob Kearney all hitting their straps after returning from injury, there is a new-found confidence and accuracy to their running game.

The game could not have started in more bizarre circumstances, nor can the home crowd’s ardour have been more rapidly doused by what must be a candidate for the quickest yellow card in the history of the game. Only recourse to the TMO would have denied Johnson that entry in the record books as the flanker ran into an airborne Dave Kearney from Goode’s reverse kick-off and sent him crashing into the ground on his right shoulder. It was both clumsy and dangerous.

Unlike when red-carding Jared Payne in last season’s quarter-final, Jerome Garces wasted little time in deciding Johnson’s fate, although despite the similarity of the offences, on this occasion he brandished a yellow with the clock showing 24 seconds.

When James Gaskell came through the Leinster maul illegally and slapped the ball out of Reddan’s grasp, Gopperth again sent the penalty up the line from half-way, this time to within five metres of Wasps’ line. Although the maul never quite set or gathered momentum, Heaslip and Gopperth carried hard before hands by Reddan, Heaslip, Madigan and Rob Kearney put McFadden over in the corner.

Madigan even converted from wide out, although Gopperth’s sliced cross kick soon after led to a soft penalty for offside from a knock-on which enabled Goode to open Wasps’ account.

Back came Leinster, earning a scrum penalty on half-way before Johnson’s return, but Madigan compounded that forgivable miss with another one from 30 metres and then kicking out on the full. But after a trademark Leinster loop by Gopperth and a superb break by Madigan, bouncing Nathan Hughes and stepping Johnson, Leinster made heavy weather of this ensuing advantage play before Madigan made it 10-3.

The only downside was that it could easily have been 20-3, while Reddan followed Dave Kearney off the pitch early in the second quarter with what appeared to be an injury to his right leg or calf.

Leinster continued to make the running, and Wasps’ persistent failure to roll away after the tackle finally saw Lorenzo Cittadini yellow carded for lying all over the ball after tackling Fitzgerald. He could give it the old Italian shrug all he liked but he was as guilty as sin.

With Madigan getting treatment, Gopperth made it 13-3, before Seán Cronin went offside as Leinster coughed up another soft three-pointer against 14 men. But from a scrum, McFadden charged up the middle to bounce Elliot Daly and following more hard carrying and recycling, Gopperth went for the line.

Garces, possibly at the behest of Heaslip, went back to an earlier moment after a Heaslip carry for the TMO to discover Isaac Boss had touched down, mole-like, for a try which Madigan converted for a 20-6 lead.

It stayed that way until half-time, despite Kane Douglas being binned for a shoulder into Johnson as the latter ran a decoy, and thanks to a howler of a miss from Goode.

Leinster left another try behind them soon after the interval following some good yardage by Murphy off an over-throw, some neat offloading by forwards as well as another hard carry by McFadden on a switch with Rob Kearney only for Dominic Ryan to cross in front of Michael Bent.

At least Garces was consistent when Hughes crossed in front of Tom Varndell before the winger touched down. During some protracted and hairy Wasps pressure after Heaslip, of all people, was bounced in the tackle, Leinster were again indebted to a good defensive read by Fitzgerald as they ultimately drove Wasps back and forced a spillage from Tom Varndell.

Moore’s tackle and Heaslip’s poach seemed to have stemmed the tide, but Madigan missed a 40 metre penalty and when Matt Mullan beat Devin Toner and Hughes bounced Heaslip – who didn’t look right – Wasps were running with more vigour than ever. A penalty to the corner, a maul and some close-in drives led to a Mullan try which Goode converted from the left and, incredibly, it was a one-score game again.

Even more incredibly, the formula was repeated as Hughes swivelled over a pile of bodies for the close-range finish, and after hitting the upright with his first attempt, Goode was afforded a re-take thanks to Darragh Fanning and McFadden charging prematurely, to make it 20-20.

Gopperth missed a drop goal chance and thankfully for Leinster so too did Goode with the last kick of the game.

Keith Duggan: Through the glories and the disgraces, we were all Maradona addicts 20:30
Rapid Vienna v Dundalk preview 20:27
Andy Farrell to delve deeper into Irish squad for team to play Georgia 19:42
Pele leads Maradona tributes: ‘One day, I hope we can play football together in the sky’ 18:38
Diego Maradona: A genius and the soul of a nation 19:31
Crossword Get access to over 6,000 interactive crosswords